kay, seen the show. And now, for Christmas, my wife bought me the Manga (first three volumes) of Yowamushi Pedal.

So for those who are old, manga are Japanese comic books. They are read in Japanese fashion, right to left, which takes some getting used to. And for those who might scoff at me reviewing “kiddy comic books”, I’ll point out that Manga is big business in Japan. The top seller (One Piece) pushed over 12 million copies over the counters last year. And when you scroll down the list, you realize that we are talking about millions and millions and millions. Serious scratch.

But outside of that, the art is dynamic and the stories compelling (as opposed to some of the suburban rot I see at booksellers these days). The art is very stylized, very visual, filled with motion and excitement and action. You can see it below. 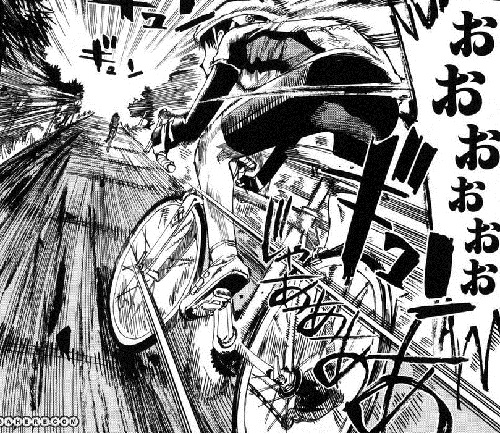 But we’re reviewing a series here, not selling the idea of Mango. So Yowamushi Pedal is about Sakamichi Onoda, a highschool kid who is a total nerd, who rides his bike to Akiba to get toys and crap at least once a week – it’s a 27 mile trip each way and he does it on a mommie bike (which is what it sounds like, a heavy gearless bike with a basket and fenders). What he thinks he’s doing to riding to get his comics. What he is actually doing is training.

Of course, his amazing riding abilities (specifically his high uphill cadence) has come to the notice of the new members of the high school bike (i.e. racing) club. And hence Okoda finds the friendships he thought anime and manga would bring him but actually in the form of cycling comradery. Each event (his first one-on-one race, the “Welcome day” race) extends over many issues – as a friend pointed out (truthfully) it can take three issues/episodes to cover the last 500 meters of a race (what with all the soul-searching and backstory that comes up). And that’s fine, just as it is fine that Onoda is always behind, always struggling to catch up, and always showing that he’s got more spunk in his nerdy body than anyone else. The fact that he smiles when he rides, he loves racing with his friends, and he’s willing to sacrifice for them endears him even more to us. He’s quite a guy, and he goes on quite a ride.

A great story for anyone who likes two wheels (or just action and conflict). Now that I’ve polished off the first three, I need to get more. Dang!

Anyway, look for it.

>>>I NEVER IMAGINED IF MASON WOULD MISS RIDING BIKES IN ANCIENT TYRE. IF YOU WANT TO SEE WHAT A MODERN MAN IN 300BC COULD MISS, CHECK OUT EARLY RETYREMENT, JUST DOWN THIS LINK!<<<