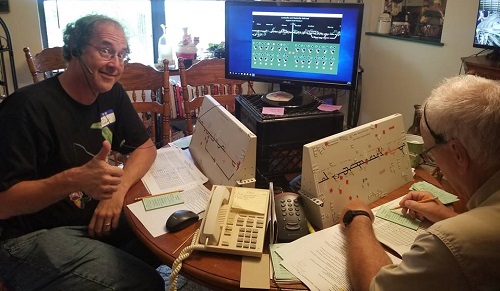 This occurrence took place on the Southern line at Granfield but it’s pretty representative of the entire session. But in a good way (since anything that doesn’t kill you makes you stronger, and I’m a very strong dispatcher now).

I was running the panels with Tom Wilson today – I’d ever so gracefully gave him the hair-puller panel (L&N) while I took on the sleepy Southern division. Other than the wreck pictured above (which happened with a literal run-away train), it was Smooth Operator time. I kicked out orders as needed, took the switch panel to fill in my time, and rather enjoyed myself. 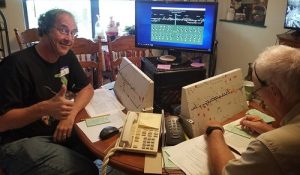 Then we stopped for lunch and everything went to hell.

It’s my belief that the sandwich shop got our order mixed up with the one to the secret government lab where LSD testing is taking place. How else to explain it? After I switched to the L&N side of the house (itself a sign of insanity), operators started leaving the phone party line open (which brought down my phone line about four times). Operators left turnouts in local control. Operators overran their warrant end points. Operators went to new and exciting places (and not the places I’d cleared them to). Operators snuck like Ninjas and ended their runs without a whisper of a hint that they’d finished. And panel coders found logic bugs during the session.

My favorite was the operator who kept pushing the damn call alarm while I was obviously on the line to several other operators, clearing orders. I’ll bet you lean over and over again on the elevator call button. And I’ll bet the elevators hate you for it, too.

I learned a valuable lesson. Never get involved with yard limits politics. When the yard backed up, the superintendent decided to tell me how to run things. Then he told me to clear southbounds through the yard. I thought that meant he’d held northbounds (and with the phones fritzy I couldn’t confirm). And this led to the great Horrific Helix Headon disaster of 2018.

But since the superintendent thinks I have an advantage here, this being my blog and all, I’ll prove him wrong and give him a place to respond.

I will say this. Everything he said above was a lie. But still, I’m a big enough man to be fair about it.

Truth be told, even through it was a shaky session, it was still a fun session. There were still laughs (laughs edging on hysterics) and occasional glimpses of good running. We introduced a number of newbies to the line (and maybe some of them might come back). But it was loads and loads of fun. Burning, wreckage-scattered fun.

Thanks, John, for having us out. Lemme know when the next one is so I can break more trains!

>>>SINCE I’M BEING FAIR ABOUT EVERYTHING, LET ME NOTE THAT THE BEST BOOKS IN THE WORLD OF FICTION ARE LOCATED RIGHT DOWN THIS LINK. WHIP OUT YOUR CREDIT CARD AND GET READY FOR SOME FUN SUMMER READING!<<<