You gotta be kidding me.

The phone did not ring.

TRAVEL INSURED INTL denied the claim and the special flight out. Why? How could they leave a woman in a foreign country with a broken arm? It turns out their non-English-speaking doctor did not fill out the O2 entry in the documentation he was supposed to provide (he only had a simple satchel with him, with no means of measuring it anyway). And I even had included (with the eight pages of documentation the insurance company wanted) his own form with the FIT TO FLY box checked, AND the hospital’s form, with the same thing clearly noted. So not only did they deny us on a technicality, they were too chicken-shit to call us and tell us. So I’ll be having words with them when I get back. 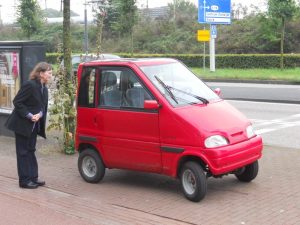 On the other hand (at the end of an unbroken arm) at least we managed to have a fairly nice day. JB didn’t want to hang around the hotel room – she wanted fresh air – so we took a slow walk in a nice neighborhood all along the waterfront. No crowds. No jostling. The scenery was wonderful, the air fresh, and it was fun just to see Amsterdam life going on around us. The afternoon was naps and reading in the room (which has a stellar view of the harbor).

Speaking of bikes, I need to mention a couple of things about their bikes. Of course, everyone rides bikes here – there are more bikes than people in Amsterdam. There are roads and signals just for bikes. Anyway, many of their bikes look gearless – just the chain and the two hubs. No shifting. Since the land is flat, it doesn’t seem to be a problem – they just zip along in their casual commutes. I even saw a woman with six-inch heels riding along.

Secondly, they have a strange way of covering the gear and chain, an enclosed sort of thing that shields the drive chain from the elements (and also protects pants legs from snagging). It seems to work – outside of one or two rust buckets, the bikes we’ve seen (and ridden on) were smooth and quiet, a real joy to ride. I wonder how they service them.

The Dutch do have some amazing variations, including bikes with forward tubs on them (for kids, dogs and cargo). Interestingly, they are generally made of wood. The first time I saw it, I thought it was a sort of tricked-out showy thing, but no, everyone’s got them.

While I saw a couple of road bikes (with flamingo-togged riders), most of the Dutch bikes are work-a-day bikes, beat up and scratched and even rusting. It makes me even more attached to my decade-old Cannondale, which squeaks and squawks and gets me there. Solidarity!

I’ve also seen a roving biker with spare tires over his handlebars and tubes in his basket, doing repairs. And here I was wondering if the Dutch ever get flats. Guess they do. Interesting job. 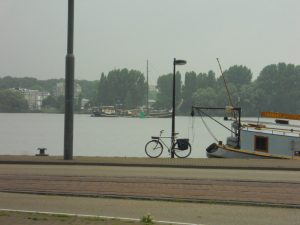 As the afternoon wore on, I went for a quick walk to see the rebuilt windmill that’s about a mile from our place – got a good look at it in the afternoon sun. Just enjoyed my last evening in Amsterdam.

Of course, when I got back, I found out that TRAVEL INSURED INTL.  and told my wife they’d put her in first class, if she went and got herself re-physicalled at the hospital. She told them to make sure they had an appointment and transport for us, then to call back. Apparently she was really pissy with them, the pissy that pain brings. Serves them right. I’m not going to go to the clinic and sit for five hours in plastic chairs just so we can skip it the next day. And why, if you decided you wanted to do this, TRAVEL INSURED INTL, did you wait until 5pm local time to come up with this idea? We’ve been sitting around most of the morning and all the afternoon and could have done it then. Or could it be that the comment I put on your Facebook page goaded you into action?

Anyway, on my windmill march, I bumped into the Gills (just back from their hovercraft adventure) and we agreed to have dinner with them downstairs. It was nice to see them a final time. Also, JB is a bit of a celebrity – everyone seems to know about her fall and were coming over to wish her well. I made sure to mention our service with TRAVEL INSURED INTL.

>>>TOMORROW WE FLY HOME – BACK TO WORK, AND BACK TO HAWKING BOOKS (ACTUALLY, I NEVER STOPPED)<<<