Built in a day

Built in a day

Built in a day, that is. We attempted the first one-day show ever. Hours were 9am – 4pm, and usually that meant taking off work a half-day, going over on Friday and stevadoring the modules into order. In the past, it’s taken 9-10 hours. With the new modules, it was just under an hour last time. So, if we could do that, why not assemble, run and drop, all in one day? 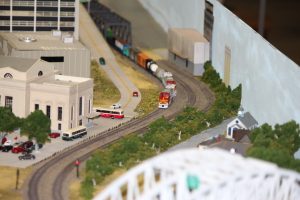 A little preliminary setup – we gathered everything and show-checked on Wednesday. Friday evening, I met Bob and John at the club and loaded (10 minutes). Today, we had a crew of five guys on hand when the modules came in at 7:10am. By 8am, we were set-up, skirted, and running. Yes, we could turn a flat expanse of concrete into a working detailed layout in 45 minutes.

The show went well – we still need more main for more trains (we were overrun with kids who love running trains and paying attention to signals). And the adults stood by and commented out well it went together and how perfect it all worked. We ran all day, then started the breakdown. Total time, breakdown to in the truck, 15:15 (fifteen minutes, fifteen seconds).

Actually, the best complement I got was when I went to take a wizz while everything was going onto the racks. One of the guys from the other module club was there, and he was looking at 1-2 hours to break down and shift into their truck. He said he’d seen us the last time and did he ever wish they could break down as fast. And with only two guys heading over to the club to unload and the rest of us following each other back to Orlando, with $250 in honorarium and tips in our club coffers and hardly any effort at all, I was certainly glad it had worked so well.

>>>HERE’S MY BOOK. SPEED READERS COULDN’T GET THROUGH IT IN THE TIME IT TAKES US TO BREAK DOWN, BUT ITS STILL GOOD!<<<