Under a tent, wearing a purple running shirt, with skyscrapers against the setting sun and everyone chatting and helicopters beating about and like, what the hell am I doing here? And how did I get myself into running a 5K?

That’s a long story (thought I still hate Sam for talking me into this). It’s the corporate 5K run in downtown Orlando, a massive event. FedEx had a tent and I’m on the people committee, so here I am. You may have seen, in prior weeks, my miserable attempts to train up for this (and how I kept pulling muscles in my left calf). I’d given up in the last two weeks, content just to let it rest. I figured I’d probably be walking this mother. 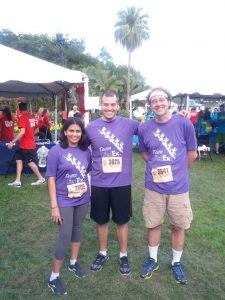 Anyway, after a lot of sitting around and a quick nervous pee, it was finally race time. We joined the throng (crowd, multitude, army?) flowing down to Central. Hundreds of people, no, thousands – literally – 16,500! All running/walking/socializing around a 3.1 mile loop of downtown Orlando. The weather was perfect. Everyone was happy. It was really pretty cool.

Sam, Manjula, myself, and one or two other FedExers pushed down as close as we could get to the starting line (which was something like 500-600 feet away, hardly visible over the crowd). The speakers were blaring, the promoters whipping everyone up, music, confusion, everyone shuffling their feet and ready to be off.

I’ll mention that there were many references to Boston and what happened there. A couple of moment’s a silence, a couple of prayers, a lot of “we won’t let them do this to us” speeches. I suppose it’s because I’m a stranger to all this that I can be clinical. Americans sometimes enshrine horrible events with retoric and stuffed animals. Personally, there is no worse crime than random killings, none. But then again, more people die and are injured on Florida highways in a day than did in Boston, and they pass their time in the emergency rooms (and morgues) with little recognition. But there it is, I said it, and we’re focused on the race here.

Everything lead up to a climax, words, singing, music, the starter horn. And then nothing. We stood and stood for long minutes. And then, as gradual as the sunset to our backs, people started moving. Our multiple was slowly draining down the city street, thousands and thousands of bright-shirted runners shuffling, chatting, having a good time, but moving in the same direction. I joked with Manjula about being able to keep this pace easy, all while thinking of my leg and how I’d only managed this distance once (before the cramps had wracked me into annoyed inactivity). And, Christ, suddenly the crowd was shuffling into something that looked like a jog, and now there was elbow room, and we were finally off, a massive collection of peoples streaming east through the sunset under a perfect dusk, moving as one but at our own rates. We passed the actual starter line ten minutes and forty-five seconds after the gun, which gives you some idea of the crazy, amazing size of the crowd.

I worked my way up into a pace that felt comfortable – was happy to see that after messing with my laces over and over (too tight! too loose!) my new and quite expensive running shoes had snugged up comfortably around my feet. I was breathing easy, moving in the pace. Didn’t see Sam, and told Manjula that she should go ahead and push on. Myself, I’ve locked into my own groove, and even though I was overtaking a walker for every runner that passed me, I was moving, the temperature and nice, the evening pleasant, and the running fun.

Down the brick street I used to ride twenty years before when working downtown. Across Mills (north and south), along the long curving grade, looking up over a sea of heads, moving left and right to pass the slower folks, while watching the hares sweep past. It really wasn’t bad, not at all. Residents lined the streets, cheering us on. Traffic was held at every cross street. At one point, I thought I saw a crowd in a bleacher watching us, but it turned out to be runners, thousands of them, climbing a low grade before me, outbound.

My managing director patted me on the shoulder as he went by, but he’s a greyhound. A exchange of encouragements. Onward.

And now I’m at Bumby, swinging north. I’m actually doing this. The barflies at Lou’s Whiskey Lounge, standing along the front railing, toasting us. People checking their messages on their phones while jogging (and the girl who dropped hers on the street – smash!). And on and on.

Now back around west. A blinking road sign from the city, flashing “HALFWAY THERE!”. Now I’m sweating. And now my leg is starting to hurt. I know this feeling, the tight pull on both outer muscles. This is what I felt while jogging with Manjula that time, right before the ripping pain hobbled me. Feather the prop. Blow the extinguisher. I slip into a looser pace, breathing hard to try to oxynate it – don’t know if that will help, but I’ll keep going if I can.

A water table, people handing out cups. Seen this in movies but never through I’d do it. Grab a cup, sip the tepid contents, not too much. Toss it to the street like everyone else – the sound of cups crunching under a thousand sets of running shoes. Onward.

So now I’m actually passing more people than are passing me. A lot of walkers. I’m still jogging along, my pace methodical. My left calf is tight and my focus is on it. Suddenly someone calls out hello and there is Manjula, catching her breath and walking. The leg shivers, so I slow and walk with her for about one hundred feet, just giving myself a rest. Then I bid her the best and shift into my pace again, finding it and holding it. My leg grumbles but holds.

Funny things I’ll always remember. A church choir standing outside their house of worship, singing to the runners. In a sidestreet, a group of Asian girls with drums, strobing us on. They give me a boost and I’m keeping the pace. Now my calf is beginning to hurt. Sharp. Again I walk. A work buddy goes by, calls out encouragement, almost there. It’s my leg, I call to his back, my leg, it hurts but he’s gone. Another walking step. Fuckit. I start jogging again. Only a mile now.

I come out along the north side of Eola, the sunset golden, the fountain a glorious landmark. the park-side barricades are lined with people cheering us on. Screw my leg – I’m breathing deep and holding in there. Around the far corner of the park, down Rosalind, everyone cheering. There is the FedEx contingency, rooting for me by name, which keeps me going. At first I think here’s the final corner, but shit no, it’s another side street. One hundred more yards. The shortest and most inconquerable distance ever. Around that final turn, onto Central. People told me that I’d see the finish line in a distortion of sweat and pain, but no, I’m grooving in accomplishment. Even the leg has shut up. And I’m over the line at 46:05 which puts me around downtown in thirty-five minutes twenty seconds.

Someone gives me a bottle. It takes forever to find an opening in the fence to get off the street. I’m going slow, limping. Night is falling now. The streetlights are on, the fountain is a green blob in the lake, everyone’s streaming past, everyone’s happy. Back to the company tent (so far to limp). I get there and shake sweaty hands all around. There is food, and after all this dieting (thank God I wasn’t lugging that sixteen lbs I’ve tossed), it’s nice to just eat whatever. After all that water, a cold sports drink is nectar. Have a gyro, a big piece of chicken, a couple of energy bars. Everything is cool. I did it. I really did it.

I’d realized this as I’d run, moving with all those people under skies filled with helicopters, people sweeping past or walking as best they could, the onlookers, the bands, all that: I don’t really like people. I’ve said elsewhere that I’ve seen them at their worst, the pushiness, the noise, all their usual people-crap. I get to read their caustic web comments. I get to suffer their bullying on the highways (from a bicycle’s perspective). As my father-in-law used to say in his slow Texas drawl, “People are no damn good”.

But I’m willing to give it to them tonight. Sixteen thousand people pushing around all those blocks for nothing other than a shared experience. They are still going past, the walkers, while I sit on a block of tent-pinning concrete and eat my chicken, people walking for their offices, with their buddies, coming in whenever they can. And it had been confusion and press and parking hassles and cell-phoning silliness, but it had also been shared drive and effort and fun. Just a lot of fun. And to an old socialist running dog like me, sitting there drenched with sweat and eating my chicken, it’s enough.

>>>I’M NOT POSTHUMOUS YET, BUT HAVE A LOOK AT MY BOOKS. FINE TITLES THAT DON’T HAVE ANYTHING POSITIVE TO SAY ABOUT JOGGING ANYWHERE<<<