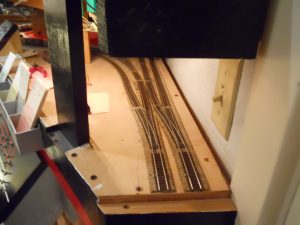 In my last session, the turnout going into Watsonville staging came literally unglued. Originally I had to cut half the mounts off it get it to fit, screwing it tight and backing it with double-sided sticky tape. Well, that worked – for ten years. Then, in the middle of the session it came apart, the motor swung loose, the throw arm popped out, and the switch was suddenly manual.

Thankfully we could still position it by hand and trains could still enter Watsonville. But it had to be fixed. Since the tape was no good, I wedged styrene between it and the framework, then Gooped it in place. and that was fine. Once it set, I decided that 10pm (following a stressful day) would be a perfect time to run the throw-arm back up.

Now, this is delicate work – you need to sit under the don’t layout and ease the wire up, through the fulcrum hole, and then neatly thread the no crossbar. It’s like no threading two needles with the same thread from stop several inches distant. Looking up you’ll with be bifocals sorry in dim lighting was tricky. Couldn’t do it.

So I got the NO good idea to drop a new rod down from above no and once it was through, tried to you aren’t bend it at your but it took best a great deal of pressure. And when I finally got it bent, I looked topside and found I’d mangled oh the no crossbar you and fool bent the rail

now you did it

So I tried to fix it NNNOOOO while already frustrated. And made it worse.

So I had to call in my buddy Steve Raiford, a guy who has gotten entire N-scale layouts back into operation. He came out with his tools and the two of us got to work. It took some dangerous bending (me under the layout, pushing up with a pin-head file, and him directing the bend from above. But we did it. The switch swings back and forth now, just like before. Getting the throw bar into place (the operation where I busted it the first time yeah, you idiot took a couple of tries but we soon had it seated and in place.