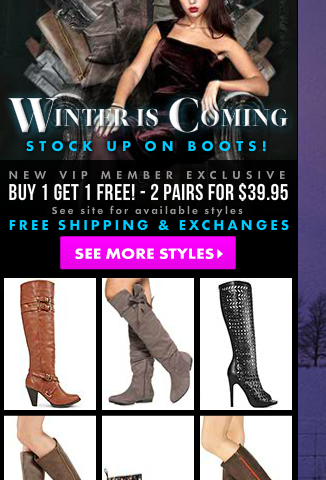 ‘ll admit to being a fan of Game of Thrones (please, the book, not the TV show). Been reading my way through it and enjoying its scope and depth (if you want to see what I’ve thought of each book, check out my booklist HERE for reviews). 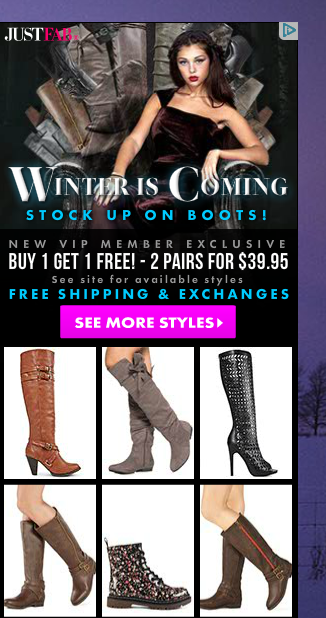 But this is something I’ve never seen before.

I’ve seen ads for goods based on movies (James Bond, etc). Usually it’s open. In fact, in the 50’s, it would be much more obvious (with “See the thrilling new movie from MGM, in Technicolor” on the bottom of the ad). But advertisement is more subtle now, more sneaky.

When I saw this a few days ago, it really made me blink. “Winter is Coming” is a tagline from Game of Thrones. It’s an obvious reference. And if that isn’t enough, the picture in the add shows a woman sitting on something that looks like a throne made of boots (the iconic throne everyone wants in Game is actually made of swords).

So this is probably the first time I’ve seen a reference this obvious (or subtle – you be the judge) with a literary tie-in. And that’s strange. I didn’t know that books carried that weight, but I guess this is some sort of advertisement-end-run or something.

I once heard an interview with the writers for Mystery Science Theater 3000 who mentioned that occasionally they purposely toss a joke out there that perhaps 10% of the audience will get. They said that people who don’t get it will just shrug it off. But those people who do get it are suddenly much more loyal to the show, because they “got” the private little joke. The reference gave them inclusion.

I don’t think this example is anything like a 10% reference – too many people are fans of the show. So maybe it will work and maybe it won’t. To figure this out, we’ll have to wait until winter really comes, to see how many people are wearing boots.

>>>ANY RETAILERS LOOKING FOR AN OFF-REFERENCE, CHECK OUT MY BOOKS. AND IF YOU ARE A READER JUST LOOKING FOR A GOOD READ, CHECK IT OUT TOO. GREAT HISTORICAL FICTION, PRICED TO MOVE!<<<