Popular western (i.e. American) culture holds that the English are a fragile, cultured (even socialist) lot while we’re a brawny, can-do bunch. But nothing could be further from the truth.

In my recent trip to London, I observed countless English cycle commuters making their way to work, in absolutely frigid temperatures with light rain forecast. Yes, driving in the city is a pain and you pay a congestion fee (something like ten bucks a day) so maybe they are forced to ride. Whatever. But I saw men and women riding in, doing what it took to get them where they were going, not complaining, getting ‘er done (as we are prone to boast). 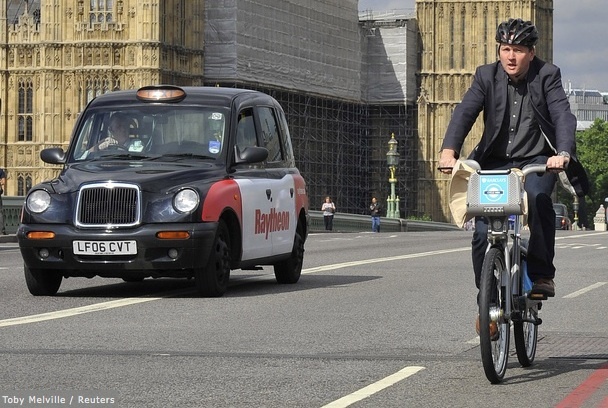 Really, how many American women can you imagine riding a bike to work in 30 degree weather? Most Yankee damsels, deprived of their fuv’s, would quail in their suburban tract homes without the slightest inkling of an alternative.

Further, there seems to be a blunt practicality with the English commuter; unlike Yanks with their spindly carbon-framed toys, the British bike is Hawker Hurricane strong, with fenders and mounting racks. They run with lights (because to not do so would be stupid) and wider tires (because slicks are). And they don’t sport flamingo suits – they don compact yet serviceable weathergear, usually with reflector bibs tossed over their shoulders. Form over fashion in every regard.

But really, there is a utilitarian grace to their commutes – they don’t have an agenda of riding in traffic or holding anyone up. They tend to follow the rules. They wear helmets and gloves. They keep to the left and remain watchful of car doors. They are professional in their cross-town journeys. As a commuter, I can actually take pride in how well they do it.

Of course, I’ve read London has reached a tipping point. Cyclists are so common that motorists anticipate them and know how to get around them. That’s not to say that there aren’t conflicts and regrettable accidents, but riding in Orlando (statistically one of the worst places on Earth to ride) it looks like heaven to me. Here, it’s chaos. Motorists are vehicular bullies who excuse their murderous behavior as divine right. And cyclists who are juvenile clowns, riding in black at night, no lights, no gear, no external awareness, no hands on the handlebars, dicking with Ipuds.

Yankee riders reject the idea of gear, reflectives, lighting, and discipline because they believe it’s a more honest, macho way to ride. English riders know better. So which culture is more can-do? Really, which?