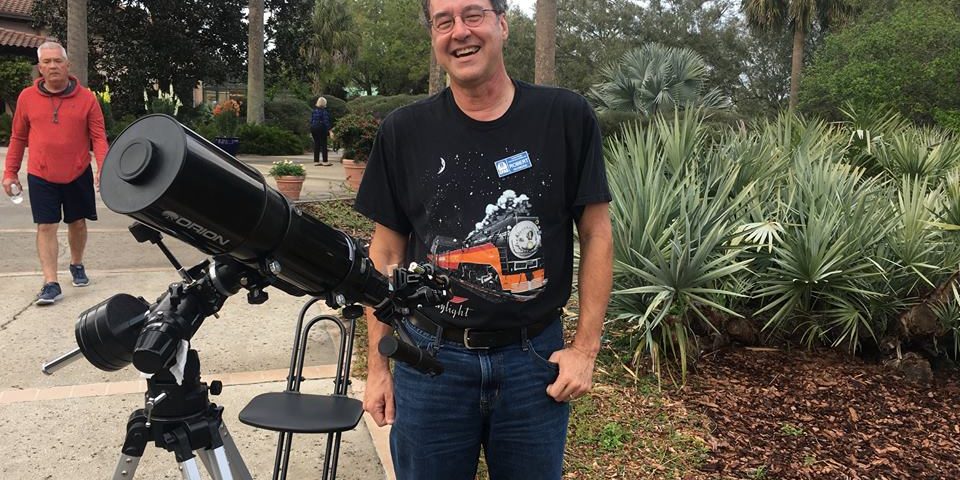 or those who don’t know it, Bok Tower is a beautiful garden with a massive tower way, way out in the Florida hinterland. They were hosting a dark sky party and our club was one of those from among the various astrological concerns to attend. There would be speakers, sky tours, and, of course, our scopes.

It way, way out there. If you think the Kuiper belt is out there, you’ve never driven down I-4 south past the parks on a Saturday. And after you clear them, that’s only Jupiter orbit – you’ve a ways to go.

But we got out there just fine, and set up on time. Because of the rain chances, they set up up in the front walkway rather than the back gardens – which proved to make their case about dark skies as huge temporary lighting lit up in the parking lot opposite, blindingly bright (I shielded people by standing back-to-it while people peeped my scope). But I’m ahead of myself. 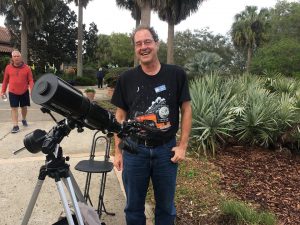 We started with moderate clouds. Venus showed up so I barreled on that to give passers-by something to see. It was beautifully crescented, something that really brings it out. Of course, one little old lady told me “I don’t see it”. So I checked – it was a little off-center. Realigned. “Still don’t see it”. I looked – there it was, in glorious highlight and shadow. I tweaked the focus a little. “I only see the moon.” Oh. No, that’s Venus. Yeah, it gets a shadow, just like the moon.

As the shows started and the skies darkened, I got ready to show off some real stars. Then the skies got even darker. Then it started to rain. I flipped the chairs over, put the barrel in the car and threw a plastic sheet over the base. Then, because I was set up on the primary walkway, I stood for about 45 minutes under an umbrella to make sure nobody tripped over it in the dark. A lot of passing people shared a laugh and a smile at the astronomer standing valiantly by his equipment in the rain. Hey, I’d tell them, that’s astronomy sometimes.

But finally the rains passed (and the dang parking lot lights came on). But still we got a lot of people hopped up on on the celestial coming through. I worked the line, showing Venus off, then switching to the Orion Nebula (listen to me talk about it – I just read a book, you know!). But people loved it – the scattershot stars, the glowing cloud. One little girl (Anna?) was quite the science wizzer, knowing all about comets and planets and things (and she knew there were only eight of them too – sharp kid). She went through my line three times – a little doll.

So overall I had a great time shooting through sucker holes and giving the crowds their eyeful. A long drive, wet shoes, and lighting like something out of Close Encounters, but man, what a lot of fun.

And everyone liked the laser sight.

>>>YOU LIKE MY WRITING? CHECK OUT MY NOVELS DOWN HERE, PRICED RIGHT!<<<