he Tuscarora Branch Line is taking shape. I got the last of the track the other day and began assembling the layout, very slowly and very carefully.

It still needed a bit of work to get together – some of our turnouts couldn’t take advantage of Kato’s handy beveled pieces (that get the roadbed flush with each other in the crotch of the turnout). So I had a bit of whittling to do in places to get it all figured.

But I checked clearances with a couple of 40 foot stock car strings and I seem okay. Looks pretty small to be able to host three people (but then again, I did eight people with a 3X8, so work out the people/square foot and let me know if this is an improvement). Started rooting through cars to find nice rolling stock to go with it (I’m still going to have to pick up twelve 40-foot Pennsy hoppers for this). Passing will be tight, but hey, this is mountain railroading. 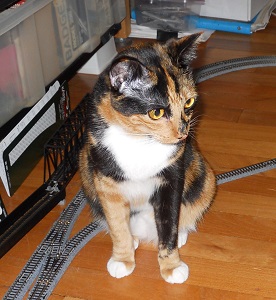 And speaking of mountain railroading, I had helpers today. Ritz and Chinki came in and put their noses into everything, playing in the shop sacks, chewing on ballast shavings, and playing (hey, stop that!) with the X-acto knife. Finally they got so berserk with the construction that Chinki made a try at the older layout and management had the fuzzy agitators forcefully removed.

So at this point, basic track is done (straight sections are in place for the two bridge places, since those cause a bit of a rise to the decking and I don’t need to fuss with uncoupling). But anyway, we’re good to go with live running possibly tomorrow night (after the club). And then it’s benchwork time. 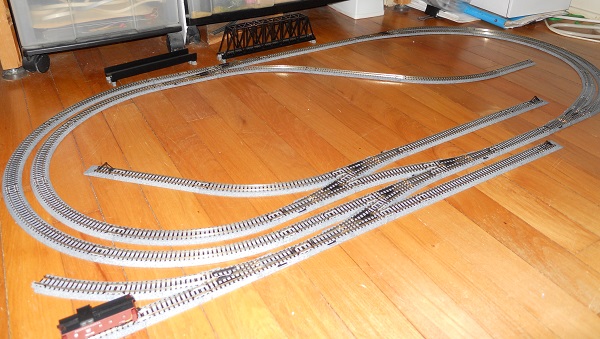 The final product. Industrial area in the front, and mine/powerplant to the right.