James Arthur Raymond passed away June 2nd, 2013 at Halifax Health Port Orange. Born in Columbus, Ohio in 1934, he resided in Bexley throughout his childhood. 1956 was a busy year for him, when he both joined the Navy and married Nancy, his childhood sweetheart.  He pursued his naval career with success and promotions across twelve duty stations and thirty years, rising to the rank of Captain. Along the way, he fathered three loving children; Robert, Patricia and Michael. He was a man of varied interests including reading (producing numerous online reviews for the books he’d enjoyed), model railroading (a club he founded just celebrated its twenty-fifth year), bridge and golf. He fully enjoyed retirement, snowbirding between beautiful homes in Ponce Inlet and Beech Mountain, North Carolina. Later in life, he would face health challenges with the same tenacity he exhibited in his nation’s service, surviving a heart attack and laryngeal cancer. He passed away peacefully in his sleep with his loving wife and family in attendance. He will be buried in the family plot at Greenlawn Cemetery in Columbus, Ohio in a private service. He is survived by his wife and children, and two grandchildren, Kirstin and Brittany. 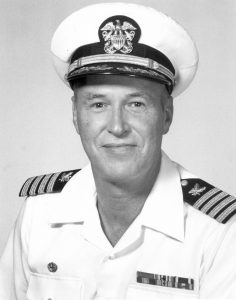