It was the first ops session (of two) that we’re staging for the convention. Five newbies (though I think we had more) along with a couple of new club members. Every experienced man I had was conducting (i.e. writing warrants and assisting new engineers) in what had to be the craziest, busiest, and most intense ops session we’ve ever had! 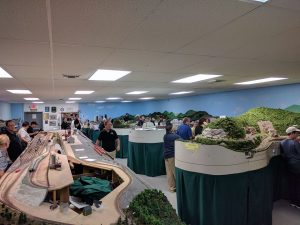 At the start, I asked newbies what they wanted to do – Freight? Locals? Each guy I’d shove towards a conductor. “Give him Zanesville!” “Drag freight this guy!” Turns out visiting college-boy Matthew wanted the panel so I gave it to him and took to the road. Hooked up with Paul, a Brit from over yonder who brought (I drool as I type this) an LNER Flying Scotsman. Now, Silver Bullet One has been pulled by a lot of crazy motive power, but this one took the cake. It was a delight to watch.

With a 5:30 timetabled departure and a warrant in my back pocket, Paul and I sat on the green-flanked tender, probably eating Bangers and Mash and swapping stories until departure. When the time clicked through, we gave two sharp toots and rolled. Pounded down the long grade out of Bound Brook, cross a soaring viaduct, and drifted into Bethlehem Station crack on our 6:30 arrival time. Things were looking good.

We were out of Bethlehem and climbing through Robert’s Run in a whirlwind of steam and litter, clattering into the mountains, making good time. Then, as I tended the firebox, I noticed burning flares on the track. A westbound freight (that was specifically ordered not to foul us) did. Slowed through the spiral tunnel, we crawled into Harris Glen just off the caboose of 223 which was sheepishly taking the siding. Unfortunately, Harris is short so we lost even more time for a saw by to win clear. With 223 behind us, we spanked down the long slope, popping through Burtnett Tunnel. I began to think that we might win back out time. And then we got to Pittsburgh.

A combination of badly spotted coaches, some out of service turnouts, the long-overdue Silver Bullet Two and an overlong coal reroute screwed us. We were two hours down before we could even shift off the platform (I figured the charm of the thing was wearing off for our inconvenienced passengers). With warrant in hand, we nearly ducked out in front of 202, a long-overdue freight that was just getting out of Martin. Regardless of what the dispatcher might think, he’d issued a lap order. Nearly killed us. Thank goodness LNER installed good brakes. I nearly went into the firebox.

Clear of these hijinks and goings-ons, we desperately tried to make up time but the dispatcher was bunny-hopping up along the river route, siding to siding. Finally we lugged into Cincinnati four hours late. We joked about which nation had the worst rail service.

While (like every club) we had our share of faults and failure, everyone seemed to have a good time. Was riding with Paul on helper extras (after helping to boost a westbound drag through Glen). Now on the siding at RedRock, we were verbally told to wait for the next eastbound and ride him back up to the summit helper pocket (I suspect the dispatcher didn’t feel like cutting paper to get us home). And here it came, with Shawn the Kid conducting a gentleman guest. I flicked the red flag at him and explained that he’d have our company going up. I don’t think I’ve seen a more overstaffed attempt – both drag and helpers had two-man crews, meaning four guys were all jammed together, trying to work things out. So we tacked things together, the engineers exchanged ideas on how they’d combine to take the hill, and off we went. And nobody noticed that Shawn had gone off to find a phone. Yes, as the conductor of the drag, he was the head man. Me, I thought we’d had clearance up the hill (given that I was told to tack on to the next eastbounder). Bad guess to make, in retrospect. Got to Glen and there was a long coal train getting ready to come down. No way to get around him, not with Harris Local working the sidings. So back we humped, tail between our legs, to derail getting into the siding (God, I hate backing long N-scale trains). And there was Shawn, waving a warrant at us. “We gotta meet a coal drag here!” Tell me something I don’t know.

As a record of sorts, I saw Mr. T running 202, just clearing the division in twenty four hours. Yeah, normally he does it in half. If you think I was going to chip you, Dispatcher Matt, here it is.

But overall, it was a riot of fun and frustration and craziness. Great to meet so many modelers and to shake so many hands. After everyone left, there were some political/religious arguments about the finer points, but there is always a bit of that. Whatever. I’m just glad that we were able to entertain so many ops fans. I hope they had as much fun as we did.

And Thursday, we’ll get even more! Looking forward to it.