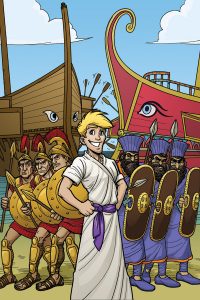 It’s always the clever fellows who fall back into time, the gleaming-teeth, hair-part guys with a conveniently useful knowledge of metallurgy, lower Nile politics or even the date of the next eclipse.

But what is some shmoe (a computer programmer, say) went back? What if this end-use user found himself in 300 BC with nothing save the shirt on his back (and no pants, incidentally*)? What could he do?

What would you do?

Mason Trellis is just this sort of reluctant chrononaut, an everyday guy who finds himself ripped from his glum modern-day corporation and thrust back to the town of Tyre on the Lebanese coast, circa 330BC. After some initial floundering, Mason finds his stride, befuddling the native Phoenicians and their Persian overlords in a number of ways: to wit…

And with all this, the reader also enjoys romances, horse chases, trireme battles, intrigue, revenge, economics, siege warfare and a parrot.

Early ReTyrement: It’s a far funner history than you learned in high school!

* = his blue jeans are the first things stolen from him. The dyes of Tyre do not come cheaply, and the dyes of Levy’s are darn-near identical!