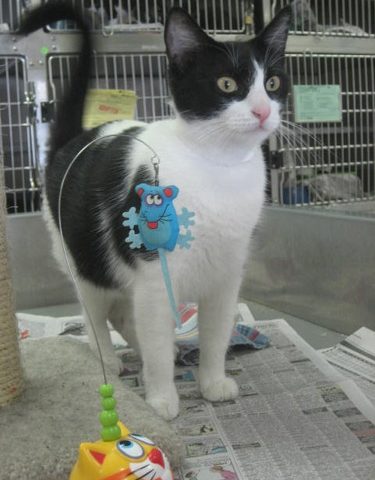 don’t know why I sang it. I hardly remembered the lyrics. But the shelter told us that when you get a cat home you should sit in the bathroom with her and her litterbox until she used it to calibrate her domain. And this new visitor/family member of ours, this little black and white darling with her tiny white nose and vastly curious eyes, she prowled the bathroom and sniffed at the box while I lay in the bathtub waiting for her to christen her abode with a poo. At one point she jumped into the tub with me (how small she was) and snuggled into my left armpit where she kneed my upper arm with pinprick claws, her purr roaring while I stroked her. And without thought I ended up singing softly the first few lines from Sweetheart, by “Franke and the Knockouts”.

Who loved you from the start…

Do dah do dah dah dah (like I said, I didn’t remember much of it)

But she didn’t mind. She wiggled even closer, her purr even louder, our hearts booming against each other.

So, screw a tiny little kitten BM. In every way, she was home now.

It’s hard to catalog (which is pun in itself) all the Mookie moments of a brilliant flame of existence over a blissful decade. But some highpoints…

When I hosted an operating session on my train layout and amongst the attendants was gruff old guy who hated cats. So trains were running and the room was packed and I stepped out into the living room for a second. And there was that cat-hater on my sofa, Mookie cuddled in his arms, belly up with a smile so catty, with the supposed cat-hater rubbing her belly. I stood there bemused – he looked up, saw that his cover was blown, whereupon moved his hand to her neck and (gently) pretended to strangle her. Gaaaaa! Sure, sure.

Whereupon the next train club election, Mookie got nominated for secretary and actually picked up a couple of votes. “I’m running against a goddamn cat,” the beleaguered incumbent asided to me. “I’d better not lose.”

Then there was the front window which looked out over the corner of our streets where an entire world of dog-walkers, feral felines and chittering squirrels cavorted. It became our beacon of home, to return from dinner or a walk to see her silhouette perched there, ears perking as lustrous eyes caught sight of us. As we came up the walk she’d jump down to attempt to nose through the door, nine parts greeting, one part daring escape.

The overnight counterpart for this was the sill in the bedroom where she’d keep her nocturnal watch through the sleeping hours, tail lashing my face as creatures of interest crackled through the ferns. Some nights something would excite her so much she’d leap from the bed and run through the house like a madcat, dashing to who knew where, only to return all aprickle to further track the mysterious trespassers. And that brings us to the night of the Grande Adventure – perhaps she threw herself at a screen-walking gecko or fluttering moth – I don’t know. But suddenly there came a crash as the screen folded and dropped from its frame, Mookie tumbling out to land in the ferns. I woke up, blinking in the sight of the gaping empty window and ran to the back door. Tossed open the door (and set off the alarm) to find her dancing on the back deck, eyes as wide as moons, her whiskers a starburst of excitement. I scooped her up before she decided the feral life was for her, feeling her little heart clattering against my shoulder as I carried her inside. 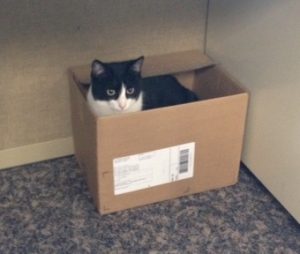 Being a corporate-contrarian, I once brought her up to the 14th floor of my office, releasing her to wander the pods on Take your daughter to work day, daring the forces of compliance to contest the bonds of adoption. She prowled the area, eyes unblinking as she looked down halls that ran away to eternity, charming the Indian ladies (“So soft,” they’d exclaim as they gingerly petted her sleek coat) and even mugging for her admirers inside a box. She truly was my daughter, and I was her daddy.

My mom remembers well the time Mookie showed total feline independence. We brought her out to mom’s condo at the beach. What we didn’t know is that a recent storm had soaked the carpets around the balcony doors. The building managers had put two fans every bit as loud and large as B17 Wright/Cyclone engines to thunder away the moister. It was thought that Mookie would cower beneath the bed in the back room. But no, she strolled between the vibrating casings, sniffing this one and then the other, fully in control, totally nonplussed.

When I got home from work, she’d stand in the crook of my arm, front paws over my shoulder, her spine curving to match the line of my chin, her purr a comforting rumble. She loved to crawl between my side and arm, to sink into that warm place, to work my skin with all four feet, blissfully happy (always the left side as she had that first night, never the right). She would follow me around the house like a little poodle. She’d walk the books behind the sofa, perching atop the highest stack, overwatching her living room. She’d greet guests with genuine warmth, helping cat novices to locate those places that needed scratching and stroking. She loved the computer heat vent. But mind you – she was not a creature of habit: every month or so she’d discover a new sleeping place, a new observation post, a new trick, a new charm. Every day with her was new, every touch a comfort.

But these stories end as they always must. It was her kidneys that failed in her tenth year. If God is reading this, it was way too soon – I should have had another ten years with her. But then there was the drop in appetite, the grim diagnosis and the slide in weight that went on and on over the long weeks we tracked it. In the end we were hydrating her with a bag and needle. Multiple food bowls and water dishes were placed strategically about the house – we didn’t want to miss an opportunity. When she lowered herself dutifully (and without enthusiasm) to eat we’d freeze in silence, not risking a distraction. But her disinterest became total; she didn’t eat for days. I thought of ways to fix it – more hydration, another trip to the vet, but my wife sobered me. “She’s just not happy anymore.”

The next morning we took her to our vet, quietly consulted our options and chose the most merciful (and hence soul-wrenching) solution. We watched her bright little soul leave her exhausted body. We drove her remains home.

Over the desperate weeks I’d considered her plot. Outside her favorite front window where she’d vigil for our return, that was the place. Of course there was a bed of wild vines which I tore into with a weeder. The ground I turned, the matted compost revealing soft warm dirt, her eternity bed. I dug down four feet, as far as I could go. Meanwhile JB moved her remains from the box to a towel, her shroud. Into the hole we lowered her, making her comfortable. Her two favorite toys, a little worn cloth ball and a mouse with a bell on its tail, were placed with her like the pharaoh’s treasures. And there she lies, her body at rest, her memories burning my heart. My eyes are wet as I write this.

But she was a cat who lived her life as I live mine: she made the world a better place. My train buddies, my movie watchers, my friends, my coworkers: everyone knew her and liked her. She had no enemies. Even the dogwalkers of our street smiled and tossed waves as she stood on her sill, monitoring the avenue’s events. My heart aches for Mookie as it has for all the cats of my life. She will be forever in my heart.

To Mookie, I leave this link where we can cuddle again and listen to Sweetheart, the song that defined us.