f you are talking fictional motivation, nothing works better, plot- and story-wise, than being evil. 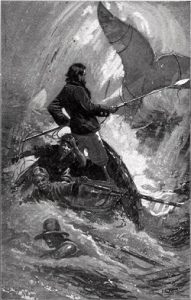 Two sea-faring examples: First, Ahab. A white whale he was attacking to drain it’s blubber and oil scars him and chomps a leg off. And now he’s angry at it in typical blame-the-victim fashion. And that’s well enough – it’s a great story that he is so driven that he sails the Pequod beyond both known waters and profit margins in his pursuit of a fish. Of course, we know how well his little rage works out, with the sole survivor floating on a coffin.

And then Nemo, who is hinted (as I remember) as being a disfranchised Indian prince (and who is pissed that the colonial powers rule over Indian peons and not him instead). So he’s taken his evil genius and built a nuclear powered ram which he’s using to hole every flag-carrying warship he can find. But  he goes down in a maelstrom so perhaps if he could have created a nuclear engine maybe he could have whipped up a good weather radar (or even a working barometer) too. But, yes, before the Nautilus sank with all hands, he did have a  fun run, breaking frigate keels while moodily hammering away on his pipe organ.

Well, like these madmen, I’ve suffered my own backstory recently. Saved a corporation millions and got not so much as a by-your-leave for it. And the gaming of my evaluation. And the run-ins with toxic coworkers. And then there was the scare over a possible degenerative disease. And then my beloved furry friend passed away. And then that goddamn storm of the century, so strong that it stripped shingles off my roof and would have taken out Nemo and his sub, no problems.

And then, finally, I took a vacation.

At which time I grew back my chin beard.

It’s tight and clean and trimmed, all salt and pepper. But now I can look at myself in the mirror and be the evil Robert Raymond. No longer do I have to be good and fair and compassionate. I’ve got a backstory now. And I’m finding it fun to not be helpful, not beyond my job description. And I don’t need to agree to everything. I can do what I want. And that’s nice.

On my bike, I’ll toss my finger. When the work creature tries to backstab me, it goes straight to the director. I’m done with being good and nice and helpful. Now I’m standing on the bridge of my emotions, laughing manically into the storm of life that whips around me, damning the eyes of all those who task me. Lawfully good characters have to live within bounds; I do not. I can do what I want and let loose my cynical nature and snide comments. I’ve been the good guy too long – let’s try out anti-heroics for a change.

None will oppose me. All will fear me.

And yes, someday I’ll shave this off and become myself once again.

>>>I NEED MONEY FOR AN ATTACK SUBMARINE. PLEASE FOLLOW THIS LINK TO MY SALES PAGE AND PICK UP A BOOK. I COMMAND YOU!<<<