I’ve always liked the practicality of Folkston, Ga. They were a little nowhere, noplace town sitting right on the CSX mainline that runs out to Jacksonville and carries heavy loads both ways. And in the classic sense of making lemons from lemonade, they welcomed the trainspotters, trainwatches and railfans, building a reviewing stand complete with a railroad scanner and bathroom. Now fans can line the right of way, watching as heavy power blows up and down the line.

The club’s been meaning to get out there for some time and, at our last meeting when pushed against the wall, I named Feb 25th for our outing. We were hoping for more people but a bit of a cold snap (62 in Orlando, but 52 by the time we got railside), a family death, sicknesses, a Daytona race and an NBA event in Orlando and other whatnot cut our numbers. We’d hoped to get more wives involved but JB came nonetheless and had a real fun time. 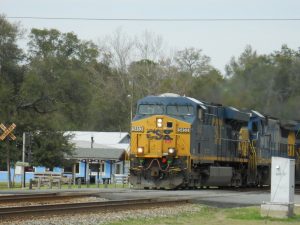 So it was nice, after all tension of getting the book out and pushing it. A member had rented a caboose/cottage the night before, so we hung around on his patio (ducking inside to enjoy the warmth). Then over to the stands to watch a couple of trains go by. Later, walked into town for a cup of coffee. Even bought some Girl Scout cookies curbside. After more trains, we all moseyed over to a local buffet – good food and lots of it. After that, we watched another couple of runs before cutting out on our separate ways. Fortunately traffic wasn’t too bad and we got home in good time.

So, a good day was had by all. And how can it be any better than heavy motive power blowing past at 40mph with a mile of cars strung behind it? Especially in the company of friends?