o years back, I used to watch Space 1999, a cool-back-then not-so-cool-on-streaming-now show. The premise (now laughable, since I am much older and wiser) is that the moon has a nuclear stockpile which blows up, driving the moon away from Earth. Far away. As in, it passes a new planet with new dangers every week.

Okay, well, space is big. First, it would take hundreds, thousands, millions of years for the moon to get to any other star that way. And who’s to say that, with the vastness of space, it would even pass anywhere close to any star? But there you go.

But the workhorses of the show were the bitching-cool Eagle transports. Someone in props had their shit together – they looked like souped-up lunar landers. They landed on landing gear on their bellies and flew around in space. I always thought it was a great design – the engine is far away from the living quarters so if the engines blew, maybe you’d survive. Way cool. 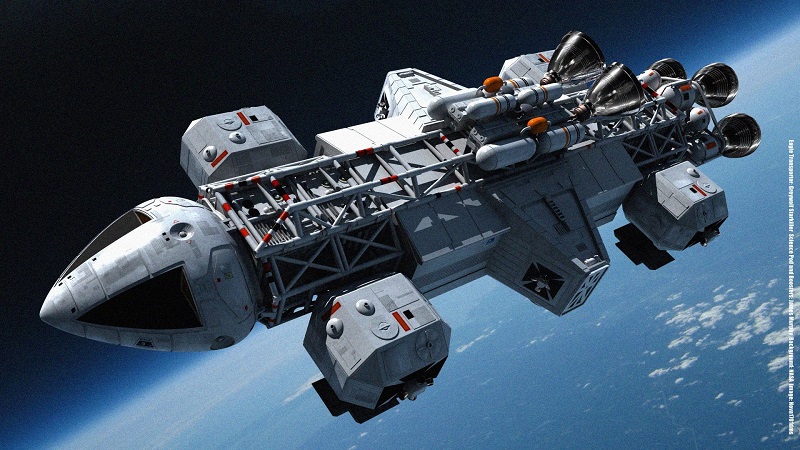 Years went by and my friend Jesse and I started writing Solar Trader, a game about interplanetary (i.e. solar system) trading in the near future. It was a lot of fun to make the planets go around the sun. And when it came to designing the ship you flew, I instantly knew it would have to be the Eagles from S1999. In our version, I envisioned more of a boom between the living quarters and engines, and a pair of cargo pods locked along that boom. It made a lot of sense, was a lot of fun, and we played it a bunch back then.

You want to play it? You can still get it for free HERE.

So years later (again) I’m asked to run a role playing game like I did for twenty years back in my youth. Then, it was StarWars, which now I despise from a franchising continuation-bullshit storytelling viewpoint. Travel was too easy. Weapons were too deadly. Jedis were a pain in the ass. Now, I didn’t want to do that – I’d rather do something more compact, where the players were stuck in one system and simply couldn’t fly away from their problems. So I launched Solaris, which we’ve been playing for over a year. It’s been a lot of fun.

Of course, since I’d already designed a working solar system for Solar Trader, I decided to import that as our sandbox. And that was great. I’d even use the “Longfellow” class freighters (that we’d had in the computer game) as our go-to spaceship. And all that went well until the players recently signed up to be the muscle for someone that seems to be a bit on the pirate-side. After all, why do you need for brutal fugitives (the infamous “Cadence Four”) as a crew? Yeah, why indeed?

But that opened up a huge can of worms. When I actually needed to know how the ship looked inside (because the players were going to be in their ship and possibly raiding other ships) I needed to think this out. And here’s the rub:

A ship like the one pictured above needs to be able to sit on the ground on it’s landing pads. And that’s fine. But when it’s in flight for days at a time under a boosting one gee, you need to be able to move around and get in crash couches and stuff. But with the boost, suddenly the bow is up and the engines are down. A seat in the front of the commons area is suddenly eight feet off the ground when underway. Given that I have to literally stack the decks (because these working ships are in flight more than they are sitting on the ground), you have to be able to access most of the ship under two different “downs”. This meant that every seat had to be located on the floor with accessibility from the back wall (which is now the deck under thrust). It was a lot of work to figure this out (at least sixty miles of bike riding) but I worked it out. So now we’ll see how flexible my players can think this Sunday.

I’m not the only one who had this problem. In the show The Expanse, their ship was never supposed to leave space. But they had to land it on a planet. In the book, they simply plunked it down and noted that the crew had problems re-orientating to walking on walls and climbing through doors. In the show, they couldn’t rework the set to do this – so they made it land on its tail like a 1950s rocket ship with a very dumb ramp from the upper quarters – you just need to make sure there is a mesa with steep walls, just high enough, for you to use as a natural gantry (which is, in all considerations, pretty damn dumb). But there you go.

I guess what I’ve learned is that if you are simply moving a ship on a screen or describing things vaguely, it’s fine to just wave it off. But when it becomes critical to really understand where things truly are (such as in a ship-to-ship boarding) then the creative rubber has to hit the road.

Sixty miles on a bike. That’s a lot of thinking.