But while I was playing Speed Circuit and Jutland, there were people playing Go. And this book was published. 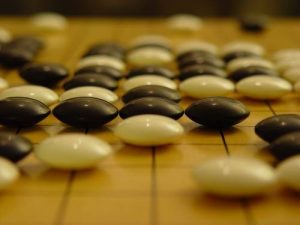 If you’ve read any of my other blogs on this, Go is the Oriental game of strategy, simplistic in its rules but mind-breakingly complex in its execution. There are people out there who actually spend their lifetime mastering this game, and making a livelihood at playing professionally. Me? I’m still a beginner. I beat two people in the Go tourney at work and then suffered a set of losses that knocked me out. Currently I’m playing a game where I suspect I’ve really screwed up. I can’t believe I walking into that mistake, with all the finesse and pain of someone walking into a half-open door. I mean, goddammit – it’s a simple game!

Still, go teaches us a number of things – efficiency and planning and the like. And I’ve read a number of books about Go (from the beginner’s point of view). But Kauru Iwamoto (the one I’m reviewing here) has written one of the best.

If you’ve never played, this might not be the best book – most books painfully explain what eyes are and why you need two, what Ko is, all that stuff. Mr. Iwamoto just breezes through all that (explaining it later, or not at all), just focusing on the essence of beginner’s Go.

And what I learned. Wow.

I learned how to project power. And how to defend when lured into a ladder. And how to break a life-and-death situation. I even followed the games played out in the end. Great book but a very slow read. It’s not a page-turner. No. It’s more a problem poser. And that slows you down.

Who can I recommend this book to? Well, if you’ve read at least one other beginner’s book (or been taught how to play and have finished a 9×9 game) then you should read this book. It’s very insightful. It will give you another set of things to think about and improve your game in a dozen small ways. I know if helped me play just a little better.

But it didn’t keep me from walking into that stupid capture. Man, what was I thinking?

Anyway, for you up and comer-stoners, have a look. This one is a cut above!

>>>IF YOU DON’T LIKE CHALLENGING GAMES, MAYBE YOU LIKE WITTY HISTORICAL NOVELS. IF SO, BUY MY BOOK!<<<