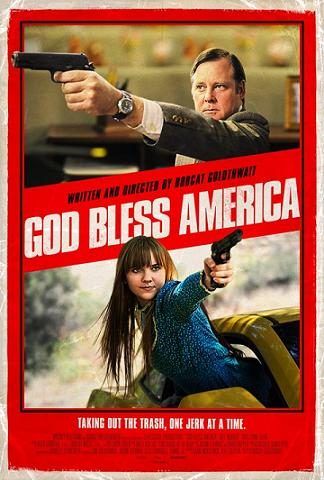 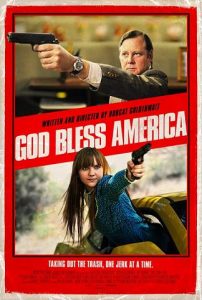 Everyone remembers Deathwish, the suburban revenge-fantasy flick out of the last century where an angered father takes on street crime, doing that vigilante stuff that seemed so cool until the real world implications (i.e. Zimmermann/Martin) intruded. So much for escapism revenge fantasies.

But now we have Deathwish for the new generation. God Bless America was assembled by Bobcat Goldthwait (yeah, that guy). Basically, its about middle-aged loser Frank, tuffed out of his job because he made a nice gesture of sending flowers to a receptionist (yet violated company policy in using her personal information (i.e. address) do do this nice deed). His ex-wife has found a young stud, his daughter is a self-involved JAP, and he’s just found out he’s got a tumor (his doctor even takes a phone call and cusses out a car dealership about the moon roof he was promised in mid-prognosis). Frank goes home, watches some horrible reality TV show about a horrible overindulged girl who screams at her parents. Weeping at the world’s self-centered horrors, he pulls out his army 45, puts it into his mouth, leans back… and butt-dials the remote. The TV comes back on. More of that horrible, horrible girl.

Frank gets and idea.

So he drives out to the school the girl is at. When she comes out to her new car (the one her parents gave her that she screamingly hated), he draws his gun, forces her into her car, cuffs her to the steering wheel, then sticks a rag into the open gas tank. Then he lights it and walks away in classic cinemagraphic slowmo while the rag burns, to the tune of Alice Cooper’s Schools out. But Frank is still a screw up. The rag burns to the point where it falls out, some girls see what’s going on. So he has to run back and put a bullet into her head instead.

So now he’s had his little revenge against the world. Now he’s ready to end it all. Sitting on a motel room bed, he slips the 45 into his mouth and… gets interrupted by a knock on the door. It’s Roxy, a girl who’d seen him earlier and though he was a perv, who now comes to thrill at his accomplishment. But when she realizes that he’s about to off himself (leaving a tear-stained suicide note), she rails against him. Why kill himself? Why not kill others. There are so many people who deserve it.

So they do, a modern Bonnie and Clyde, delivering death to all the self-centered asshats who deserve it.

And I loved it.

Frank pretty much touches on all those things I hate about the world; right-wing TV commentators, anti-gay protesters at funerals, people who talk in theaters, people who park shiny new cars across two spots. And Frank is there for them with his gun loaded and ready to fire, Roxy there to back him up. It’s a gruesome gorefest that Hobo with a Shotgun just missed being. It’s intelligent and grim and funny and sad. The local paper hated it (one-and-a-half stars) but I loved it.

I was having a very bad day until I saw this flick. It’s nice to know that someone knows how I feel and has my back. And that he’s got a hot, smoking gun.

>>>IF REVENGE FANTASIES AREN’T YOUR THING, HOW ABOUT A TIME-TRAVEL ONE?<<<