Hobo with a shotgun (review)

Hobo with a shotgun (review) 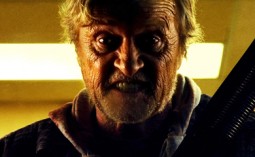 I first became aware of Rutger Hauer in a Miami movie theater in 1982, watching Blade Runner. When Roy (Hauer), an android with a very limited life-span remaining, glides like a leather-clad punk cloud towards his manufacturer, Tyrell, and says, “I want more life, fucker”, it was a “frankly, Scarlett” moment for me. And later, when he slowly pushes his thumbs into Tyrell’s eye-sockets, releasing a horrific ooze of blood, I was sinking into my seat while the camera cut away to an imperial owl, its eyes reflecting the light while the screams went on.

Hobo with a Shotgun is at the other end of Hauer’s long life. Now he’s old, late-60s, and his face is as characteristically wrinkled as his Blade Runner face was smooth. It’s been 30 years; he’s moved on, I’ve moved on, and movies have moved on.

Hobo was made from a fake-trailer for that unsuccessful Grindhouse effort a few years back, expanded into a movie length feature (yes, the fake trailer begets the real film). Really, the only reason I’d see it was to see Hauer again, just to see him in action. And here, there is nothing but action.

In short, a Hobo drops off a train into a city so evil that it’s skyline is perpetually afire and that casual crimes are taking place – my favorite (if it could be called that) is the fake Santa driving past, chortling evilly, while a small child bangs on the back window trying to escape. Yes, its messed up.

The Hobo has one dream, that of idyllically mowing a wide green lawn (impractical, but aren’t all dreams?). To move towards that goal, he has his sights set on a used mower in a pawn shop, $49.95. He panhandles, enduring puke and much, much more, to finally grubstake up the cash. However, when he goes into the shop, a trio of screaming, whacked out, gun-toting maniacs come in. They want the meager contents of the register and will kill to get it. Hauer, standing over his beloved mower, feels the dream  slipping from his dirty hands. But there on the wall is a shotgun, also for $49.95. He chooses his path. Rachat! BOOM! BOOM! BOOM!

And that’s why I made all the comparisons between Young Hauer and Old. His use of “Fucker” was surgically inserted, his act of sadistic violence brutal yet short. This movie is pretty much both those things, all the way through. People get their willies blown off. Doctors are hung. People get their hands shoved (with gruesome cinematography) into whirling lawnmowers (yes, it does play a part).

But let’s stop there. I’m not going to state the obvious, that movies change, tastes change, that things move on. As a student of film, I understand that. But I’ll admit, as we waded through the pointedly gratuitous violence and the clever lines (Headline: Hobo Stops Begging, Demands Change), I couldn’t help but notice the Morlockish hoots and bellows echoing in the cinematic gloom. I had to wonder, did these children around me realize they were being teased along by the director, their base lusts pandered to? Or was I the one who didn’t get it, looking for art and meaning where it was never intended to be? How many times can irony be folded back on itself, and what happens when parody is layered so deeply its bedrocking reality is lost?

But I’ll admit, it was fun.