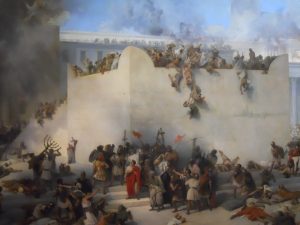 This is a masterpiece, not a US airport

I dreamed of Charlotte airport, of the TSA checks, their purple cloaks, of the power imposed by the Imperial presidencies and of simple brute force. I could hear the screams, smell the smoke…

Actually, I was standing in the Gallerie dell’ Accademia, a beautiful collections of paintings running from the middle ages until the Renaissance. Quite interesting see how the crucifixion, the rebirth, all those moments were captured and presented over the long centuries. The picture shown here, attributed to US customs in Charlotte (soon enough I’d face that horror) was actually the Destruction of the Temple of Jerusalem by Francesco Hayez, which held me spellbound in a way that 2012 never quite did.

After a morning the the temple of high art, we parted ways with the sister, got on the bloody wrong water bus (again), missed our stop we’d intended, didn’t get to the door quick enough at the next, and were carried damn near back to the hotel where in the strangest bit of serendipity yet, we saw my sister in the crowd (who’d also gotten on the wrong boat and come around the southern industrial end of the island). We waved from our boat as we passed her on her bridge. Small world.

I don’t have the name of the place, but we did tour an old palace which was set up to show the lifestyles of the rich and famous in 1800; very interesting but I left with the thought that if JB had to put on all those stays and petticoats and such, we’d never get out the door.

Then a slow, confused pass through the Guggenheim museum on the southern side of the island. Look, I know there is a popular thread in western culture to show men as low-class stumbling boobs, but I just don’t get modern art. I looked and looked, even closed an eye, but I still couldn’t catch what all it was about. Maybe it was hung upside down? I don’t know.

While in the museum, I’d been glancing out the window (somewhat at the natural beauty of the city as opposed to the forced message of the art on the nearby walls, but mostly at the dark weather). It had been threatening rain for a while and the umbrella was back at the room. Yet when we came out the storms were pleasantly distant. We wandered over to Santa Maria della Salute (a huge church in a city filled with them), sat on the steps and drowsed at San Marco Plaza from across the Grand Canal’s mouth. The gulls where wheeling about the tower. The gondolas were sliding past. The steps were warm, the air moist and cool, the moment perfect. Whenever I think of Venice (and pure blissful happiness) I’ll think of that speck in time. 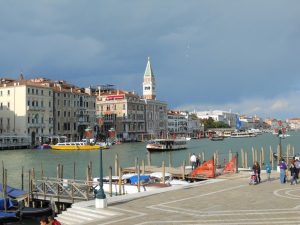 For dinner, the ladies wanted their own peppercorn steak (voted unanimously by our party to have been the best meal anyone had ever tasted). However, we found that the restaurant was closed Wednesday nights; sorry, Charlie, only real tuna gets to be starkissed. And while we wandered forever and eventually found a nice enough restaurant in the Rialto district, it wasn’t the same. It was good, but not the bliss-on-a-plate from the night before.

But a somberness had fallen over our party. Tomorrow we would be positioning for our trip back home. The melodious ring of every church bell brought us closer to our departure…