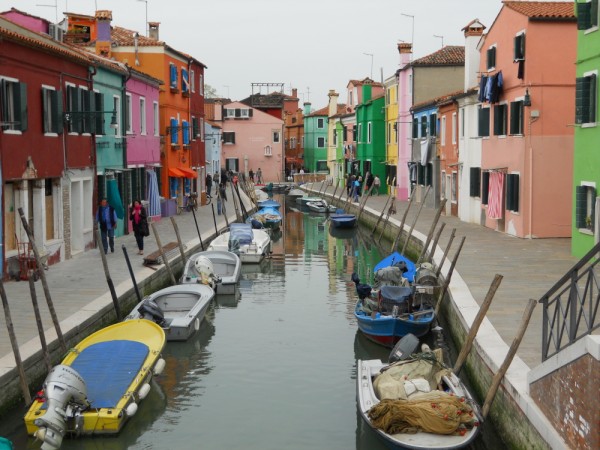 Our water-bus chugged through the early morning mist, rounding the point and easing down the north face of Venice on its way towards the lagoon islands. I was standing in the central open area, minding my business when suddenly something warm settled over my foot. I looked down to see a good-sized dog leaning against my leg. I didn’t move, content just to watch him (and snap a picture). At the final Venice stop, his master stepped from the boat and the dog obediently followed him onto the dock without a glance back. I watched his departure with a melancholy air.

I was going shopping.

The city forced the glass makers to the Island of Murano back in the middle ages, to keep them from burning their opulent city to the waterline. Tight quarters makes for high-density shopping, all sorts of glass things, goblets and trinkets, chandeliers and froggies, servicing all manner of tastes (and that describes my wife and sister well: they had all manner of tastes).

And so it was shop to shop, door to door. Don’t get me wrong, it was all very interesting and I enjoyed picking up some beads for a friend, but still. We did look in on the museum but it wasn’t much – they told you about the types of glass but really had nothing about how they were made nor the history of the island. It was like a guided tour of a well-stocked cupboard.

After about five hours of this, we set sail for the island of Burano. My sister and I were at the rail, snapping pictures. I shot the approach to the island, frowning at my camera display. Tilted. Took another shot. Tilted. Took another. Tilted. Then I looked really close and realized it wasn’t my waterline that was off – the central church tower was leaning to starboard. Every time I lined up on it, it would tip the waterline and ruin the shot. The guidebook confirmed this fact. 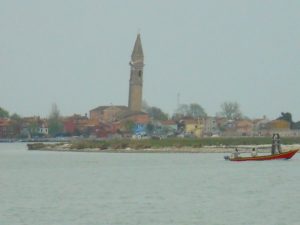 You gotta wonder how the monks felt after they built it and realized (a) it was leaning and (b) Piza had grabbed the trademark. Unhappy monks, indeed. 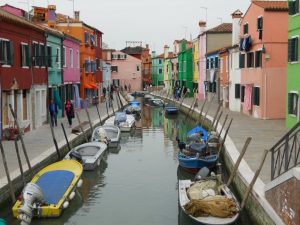 Anyway, Burano is known for its lace but also its colorful buildings. I don’t know why this is – perhaps paint can only be shipped in in quarts and they can never get the same colors. The city was a riot of hues, quite pretty, a sort of urban fall foliage.

By the time we’d drained our cameras of RGB, it was time to head home. A cold spell was coming through and JB hadn’t brought a jacket. I ended up giving her mine, and then we proceeded to board the wrong water bus and go the wrong way for a bit. Fortunately we got turned around before hypothermia set in, and it was jolly warm in the cabin. When we got to our home dock, I bee-lined for the room. Venice is nice for strolling but not with chattering teeth.

Dressed warmer, we set out into the neighborhoods JB and I had explored the night prior, off the tourist trails. We found a restaurant and settled outside, ordering our food. Of course, meals in Italy tend to be at a slower pace so we waited. The wind began to pick up and the temperature dropped further. The women next to us talked through the button holes of their down coats. Then my sister called the waitress over. “Can we move inside?”

It was like Exodus – a stream of diners followed us in. So now we were all nice and cozy and dinner was nothing short of spectacular. My second course was a steak smothered in sauce and seasoned with peppercorns. And for the record, it was the BEST STEAK I’D EVER EATEN. There was not a sliver of fat on it, and each slice melted over my tongue. I just moaned my way through it. I even (grudgingly) shared a bit with the ladies and did their eyes flutter. But I was, of course, ever the gentleman, and politely noted that “Steak mine! Mine! Grrrrr!”

I still think of that steak and sigh.

But time was running out for us. Everything ends, even vacations.