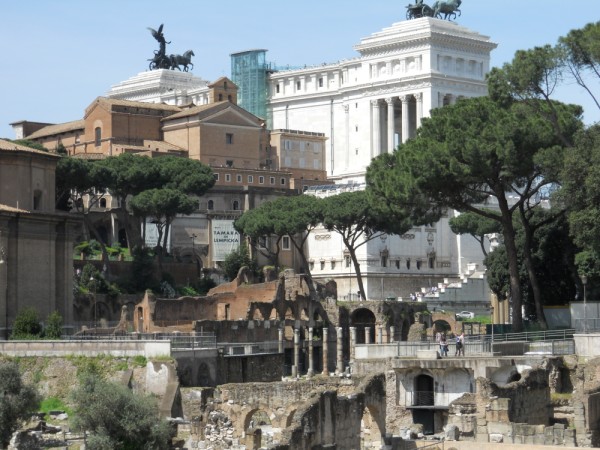 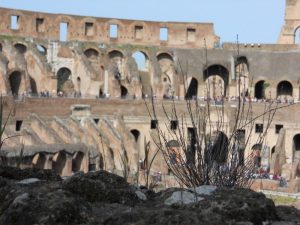 I’m halfway to the sun, high in the seating of the massive Coliseum, watching as a line of armored militia lock shields against four times their number of long-haired, screaming enemies of the empire.

Did I mention I’m facing outwards? And that I’m watching a students and riot police play hot-potato with a tear gas canister on the street below?

Still, on our first full day in country, we headed out early for the ruins. My sister was clever enough to suggest the Roma Pass, which grands free transport all over the city and two free entries to state-run museums. As the Coliseum is one, we breezed to the head of the line and popped right in.

We’ve been to the Coliseum in El Jem, Tunisia, and while it was big, it wasn’t this big. The walls stand impossibly high against the sky. It’s nearly impossible to imagine a full house, with screaming plebs, the emperor in his box, blood on the sands. To see it in pictures is nearly not enough.

We leave after the riot ends, deciding to follow 24 walks in Rome to view the ruins. Evidently the book is not quite current as we find our route blocked by an exit-only gate – the central ruins are now fenced – no idle strolling in. Using our second pass, we zip in and have a look. 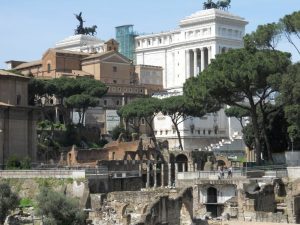 It’s almost too much history. Image traveling to ten different ruins in ten days. Think of how you’d take the time to inspect each one, noting its stateliness and detail, even its historic aura, before getting back into your car to proceed to the next. Now imagine all these in one place, antiquities piled beneath the Christmas Tree. One ends up looking past the current ruins, towards the next and the one after that.

The villa of the Vestal Virgins was my favorite – the central garden was very peaceful; one could almost detect the faintest whiff of repressed grace.

We also rode the tube south a stop, to look into the Circus Maximus. Depressing in that all that was left was pretty much a hole in the ground.

Then, back to the chaos at Termini, switching lines to ride east. Off three stops out, a short walk to San Giovanni, a huge cathedral that could store blimps. Just massive. In places like these, the camera sounds so loud, echoing in the holy expanse. I kept looking over my shoulder for church assassins or papal enforcers, but evidently I did not cross whatever boundaries exist.

That evening, we visited a great restaurant a few blocks east of Termini, Bruno-something-or-other. Just great food as always.

And if we thought we’d seen ruins today, tomorrow held a special surprise…