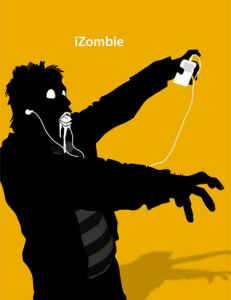 It was a risk. I had to buy a cell phone.

I hate the effing thing, but being a bike-commuter I might need to flare-gun the wife for recovery (like the time I collided head-on with a Mormon missionary). Or that time I was out and she had a medical emergency. So I bought one, but to inoculate myself I gave my wife the number and refused to memorize it myself. You could torture me and I couldn’t give it to you. And the phone is off 99% of the time anyway.

You’ve seen them, these once-humans who have turned into brainless, soulless hulks. They’ve destroyed themselves and now seek to destroy all those within reach (or earshot). They can’t always be identified by their elbow-jacked stance or a phone fused to their cheek (some have hidden afflictions, like a Bluetooth). Still, some attributes are obvious, such as…

* They share a wandering brainless gait, shambling in circles, their arms thrusting about as if in some imaginary social setting. Often they can be found slowly plodding about elevator lobbies, at the tops of escalators, in narrow hallways and sidewalks. Exercise caution around them; they can turn and flail unexpectedly.

* They have no sense of preservation, to the point they will walk into traffic without looking. I once encountered one walking its poor neglected dog. It stepped out right in front of my bike – the dog showed sense and stopped. Still, I almost clotheslined the thrumming leash (still babbling incoherently, the undead thing continued across the street, dragging its dog, almost getting strained by an FUV’s grill).

* They have no social awareness. They talk about their hemorrhoids in funerals, infidelities in restaurants, business deals in toilet stalls. While it might sound like guttural adult conversation, it isn’t. They’re only noisemaking at another iZombie.

* They can change from a normal human into an iZombie unexpectedly. You might be having an intelligent conversation with a friend at a restaurant or enjoying a movie together and suddenly their hidden curse will manifest. The injustice is that while your companion jibbers and oinks, you’ll suffer societal guilt by association. After all, you’re with Stupid.

* Unlike humans, with passions, opinions, experiences and personalities which constitute a soul, they have a ring-tone.

* They have a hive mind and can slowly form into packs. Usually this happens on Friday evenings in parking garage stairwells when you are just trying to go home, with the shuffling iZombie in front of you burbling “Leeetsss mmeeet at Ooolivve gardooon…”

* They have no purpose, other than to buy minutes to yack-off into the ether. The irony is that often the minutes they burn involve a discussion about their minutes. Probably while you are eating lunch.

* They desire to infect others, grunting to you about “calling plans” and “friends networks”. Having already rejected standard social norms, iZombies don’t understand the meanings of yawning, eye-rolling or feinting death. While they can be occasionally be distracted by discussing books, it might tragically backfire when they haul out their Kindle to show you.

* They are dead. While they might have some sort of automatic reflex reactions (such as texting), their souls have fled their bodies. They cannot experience love, beauty, friendship, inner peace, social belonging, personal reflection, dreams, fantasies, raptures nor the serenity of silence.

It comes down to choice, of which side you are on. In the ongoing social apocalypse you can either be pure or you can be corrupted. You can be one of the true humans, or join the moaning, groaning, staggering ranks of the cell-cursed. Either you walk the walk or you talk the talk. Choose.