‘ve written novels which have been represented by agents and published by publishing houses. I’ve self-published. I’ve self-promoted. I’ve given speeches about my subjects in public (shudder!). I’ve flogged in book shows. I’ve even written radio programs. And, of course, I blog (right?). I even proof-read for others. But here’s a new one. Now I’m a magazine editor.

The south-east division of the National Model Railroad Association has had (for reasons unclear to me) issues with, well, getting out its issues. Nothing has shipped for a half-year (should be quarterly). This makes the fact that everyone identifies me as a writer a dangerous thing, especially if two NMRA officials share the same house and I go over there for a lot for railroading. And so they asked – since I was a writer and all – if I’d edit their journal.

What am I going to say – no? And it’s great to come over and run your trains? 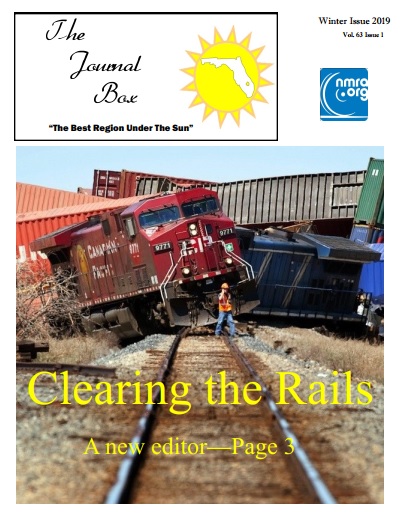 We managed to get the issue out with a lot of scrambling over four solid days. First, I had to learn Microsoft Publisher from scratch. Then, I had to clean some weird things up (like that there were no footers, simply text boxes at the bottom of each page). And those missing fonts I had to track down. And if that wasn’t enough, all those critical entries from high muckity-mucks – those came in after the “please by” deadline – meaning I had to learn how to shift stuff over and over while re-arranging.

I actually found myself waking up and thinking, Crap, I gotta go to work. Really, when’s this retirement supposed to happen?

Anyway, got the issue out and everyone’s happy. Especially me. There is something about getting an issue to bed (even in an office of one) that is extremely satisfying. It’s all there, every tiny decision I made for this to go there, colors, fonts, appearance. So I guess I’ll have to keep these issues as I produce them as keepsakes (and, hey, aren’t I trying  to get rid of all this life-crap stuff while I’m doing this?).

Who knows – maybe I’ll do this for thirty years and then, when I’m too frail or can’t see or don’t care, some other young buck of sixty can take over for me.