Wednesday – all the grownup ladies ran off to do things together (I never did find out what it was – when I’d ask, they’d giggle like Wilma Flintstone and Betty Rubble). Mike and his daughters and I tubed up to Collingdale where there is a cluster of air museums. How can you go wrong? 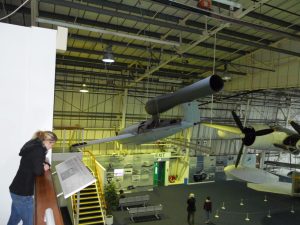 Brittany gets a buzz (bomb)

It was Mecca for me – can you name a plane type that wasn’t there? At first I wasn’t sure – it was sorta a generic museum with a couple of planes (Sopwith Camel, Fokker DVII, ME109, ME262, some other things (how aerially urbane of me)). Then we found a big WW2 section with bombers and such. One interesting moment; I took the group into a 4D B-17 simulator (3D plus wind and shaking) – the story was pretty hard. Planes explode, break up, and the narrator’s own plane goes down with all hands save him. When we came out, the girls were thoughtful for a moment, then asked Mike if that was really how it was over Germany. So we went over to the standing B-17 and had a second, longer look at it.

The same thing happened in the nearby Battle of Britain museum. I caught Brittany studying the huge pictures of the Blitz with images of places she’d just been under palls of smoke. And when we watched the short presentation they showed about the war, all that stuff Mike and I had been yammering about made more sense to them. So that was good – at least they got a history lesson out of it.

At this point I admit my being wrong (again!) – Mike and the girls went prowling into a factory area that I thought was off-limits. I loitered around the parking lot – hey, someone would need to bail them out. The Brittany came back and got me – they’d discovered an auxiliary museum of World War One British aircraft. Of course, this was my element. Still, it’s a test of any wordsmith to describe to two teenage girls the absolute stunning beauty of an SE5a. I mean, those squared wings… that tombstone radiator… the rakish angle… I mean, just look at it! 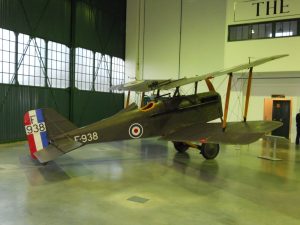 After all this, we dragged home. On a lark, that evening JB, Pat, Kirstin and I went back downtown and managed to score a set of 11th hour tickets to “Ladykillers”, a wonderful play based on the old Alec Guinness movie. Great sets, fun acting, wonderful pace. Taught Kirstin to like Gin & Tonics. Then, as a cautionary note, when we made our way back to the tube, Piccadilly was filled with drunken revelers and we watched one sad sack slide off a wall and land full on his face.

Anyway, tomorrow Mike and his family would be off visiting friends up north, leaving JB, Pat and I to further cart about…