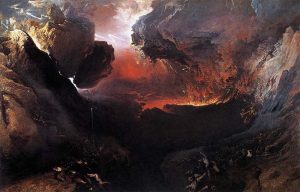 Yes, let’s get this one started right! Look at the sinners sliding into the abyss! Look at the mountains falling on top of them! Check out that city that has flipped over and is screaming down to pulp a million people beneath it, even as it breaks apart. Unlike the movie 2012 with LA at a 20 degree tilt, this is 130 degrees! Wow!

First things first – Mike & Co were still up north. Pat had all sorts of things she wanted to see (fare thee well). JB and I wanted to do the Tate Britain and see what this Apocalypse deal was all about.

Now here’s the deal – we were coming back on Christmas morning, early, early (like 5:30am). I wasn’t looking forward to moving two heavy suitcases through the tube to Victoria Station, so I’d arranged for a cab. However, while going on that morning, I checked with the tube officials and found out that no trains would be running Christmas day. That would have come as a shock to my brother when he showed up outside the locked station with suitcases, wife, and kids.

We decided to purchase our tickets early and came up at Victoria – second good thing. The station itself would be closed and the Gatwick Express would only be run as a bus service. Being a Type-A, I asked “where”. The woman at the counter gave me directions to the stop. We came out on Buckingham Palace Road, but a driver said, “No, the Gatwick will be at in the front Christmas morning”. So we went there and the informational officer told us, “No, three blocks south, at the Victoria Coach Station”. A long slog down there. “Closed Christmas day, Mate.”

This is what I didn’t want to be doing Christmas morning in the dark, with suitcases. So back to the ticket window to ask, point blank, “Where’s the bloody bus leaving from?” This time, the ticket guy said, “Take the lift to the car park. You can’t miss it”. Went up there and found taxi stands. Came back and glared at him and he said, “Oh, no, on Christmas morning, the bus will be there. Normally it’s only taxis, but not that day.”

Why didn’t you say that before I walked all that way for a look?

So, with a tentative assurance as to the tentative location of the departure bus, we tubed over to the Tate Britain. On display were the works of George Martin, a early-nineteenth century popular artist who specialized in painting of Biblical scenes (of destruction and paradise). These were huge paintings – you could stand before them and be lost in them. The one above, I marveled at all the details of the doomed sinners and exploding city. There were also ones of Sodom and Gomorrah (under a lave firestorm, with Lot’s wife getting Mortonized). And the Tower of Babel. And the destruction of Babylon. Huge sweeping landscapes, eye-tearingly intricate cities stacked into the clouds, and lots-and-lots of pain and carnage. Great fun!

After dealing with the Victoria ticket officials and the end of the world, we were pretty knackered and went home for a lie-down. Around seven, everyone assembled. Pat was leaving Christmas eve (tomorrow) so it would be our last group night. After sitting Mike down and explaining what I’d discovered (and watching him make cab reservations then and there), we went out to a nice up-scale Italian place and had a wonderful meal together.

Christmas was in the air. The trip would soon be over.