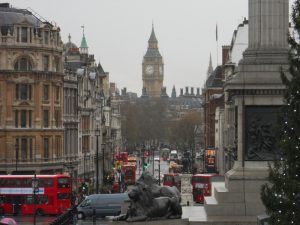 With Mike and his girls off to see some things, and my sister off to see other things, JB and I headed off to see our things. We started at the National Gallery, something we’d wanted to do last trip (but had gotten sidetracked by the Transport Museum (little pun there)). Anyway, got to see all the great Turners (including the one of Dido building Carthage, which I’d had for my desktop for the year in which I wrote Fire and Bronze). Lots of gawking, lots of neat paintings… 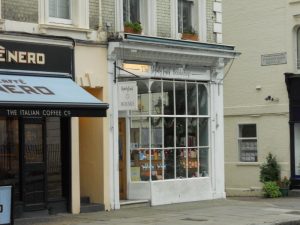 It was drizzling outside, but we squelched over to Cecil Court (a street full of booksellers) where I picked up a collection of Dashiell Hammett stories. On the way home, we also stopped in to take a look into Slightly Foxed, a little bookstore on Gloucester Road. And talking to the proprietor was like the moment where two master swordsmen take each other’s measure as they begin to engage. Yes, we’d both read Flashman which lead to Captain Blood and Scaramouche. A flèche by me to Captain from Castile, which he parried with The Fencing Master. And ’round and ’round the classics we went, in quartata, appel, lunge! In the end, I backed from the store, panting, my arms filled with books, my pockets with scribbled recommendations, the reader’s booty. Great shop – check them out.

We hooked back up for a dinner of Fish and Chips at a local shop before tubing back crosstown (love the underground) to take in the lights and shopping of Regents Street. The lights, the crowds, the hustle and bustle. A mall just doesn’t compare. We went into a five-story toy shop (hardly any trains, for shame). Later, after all that jolly-jingle, back in the hotel, Mike searched day-trips to Dover on his laptop but found the castle to be closed. I’d been thinking of a run over to Wales, but London, the mother of cities, still embraced me. I was more than happy to remain within its familiar (but oh-so-exciting) districts.