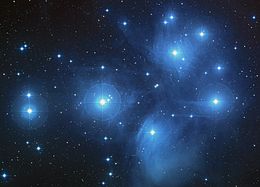 uddy Greg was supposed to come over for movies and dinner and some Go. I figured, with predictions for a fine night and Orion marked overhead at midnight, to set the scope up. But then he called and canceled (I can’t tell you the reason, but man, what a reason). So here I was with an evening suddenly free and a need to fill it.

In the cancelation call, I’d mentioned my intention of the scope. He told me that it wasn’t high on his list. With the planets all shyly in conjunction, he didn’t want to look at pinpoints of light close up. He’d enjoyed looking at planets, but didn’t see the fun in stars.

I was thinking about that as I pulled the scope out under my suddenly-free night. Pinpoints of lights? Anything but.

With the scope set, I let it cool a bit before going back out. I was mainly focusing on running more tests with my new 24mm Scientific Explorer eyepiece, rapidly becoming my favorite. My first look-see, the Pleiades. Is there anything prettier in the heavens than those faintly blue burners? I tracked them for a while and then, with the help of the laser, moved over to Taurus and checked out The Hyades. Very pretty – that’s on my list for looking at further. Then over to the constellation Auriga, boresigthing Capella with the spotting scope (I’m too dependent on that laser). From there, I hunted out M36, a cluster just off the line between two of Auriga’s stars. The trick here (in finding something in deep space) is to line up on it so that the ecliptic is roughly set. Then scroll along that line until you find what you are looking for. And that’s what I did. And there was M36.

It’s a very pretty cluster. I actually got the barlow lens on the 24mm (for about 60x) and just looked it over. Really stunning, this tight clot of stars. While I was looking, suddenly everything got glaucoma-ish. Blinking, I looked up. Broken clouds were moving overhead, clouds both unpredicted and unwelcome. Nothing to do but cap off the barrel and go inside. There was still something I wanted to see.

An hour later, came out and found the skies clear. Orion, as expected, was above the trees, that distinct old favorite. And that’s what I’d planned my evening around – M42, the Orion Nebula. And with my new eyepiece (and the barlow) what a view I enjoyed. I could clearly make out the gas cloud, one of my favorite deep sky objects. I sat out under the stars for a good 45 minutes, until I leaned back and saw that a new bank of clouds (solid to the horizon) were moving in. This looked like quitting time – moved everything in and called it a night.

And that’s the thing. Yes, stars aren’t as sexy as planets. But there is something about them, of plotting the star-hop and moving about, looking. And with all the clusters and nebulae I got to look at, how can you say is was a dull night under the pinpoints?

You lost out, Pal.

>>>NO MOON – TOO BAD BECAUSE MY CURRENT BOOK I’M WRITING TAKES PLACE ON IT. STILL, YOU CAN CHECK OUT MY PUBLISHED HISTORICAL FICTION. FUN AND SWORDS AND BLOOD. HOW CAN YOU MISS?<<<