he reason I haven’t posted anything to this thread is because we’ve had no viewing nights all summer. Rain. Clouds. Haze. Even the Perseid meteor shower – we saw three falls through a cloud “keyhole”. Bah!

Last night, I’d checked the sky earlier and saw the moon through a silken veil of haze – bah again! But while on the phone with a buddy at 10pm, I stepped out on the back porch and saw, to my amazement – EVERYTHING! Clear as a bell. I hadn’t had a night like this in months. I finished the phone call while shifting the tripod onto the back grass (ever cradle a phone under your chin while leveling a tripod – tricky). Anyway, locked everything together, swung the scope around, and did some mooning. 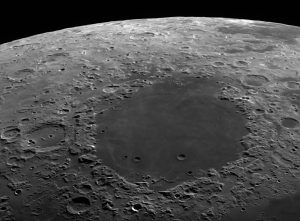 Now, this isn’t my picture. But at 120X, I could see the Sea of Crisis at a just about this size. Found my fab Tycho and oogled the crater’s central knob – 1.6 klics in height. Saw a couple of rilles – these are trenches that cross the moon; never gotten a look at them. Then I started to “moonwalk”, which I do by aiming at the leading edge of the moon and then watching as it slowly slides across my view. It takes, I dunno, five minutes or so, but I get some shake-free viewing. Wow.

Next up – Vega. I’ve been trying to look at this since early summer; there is a cluster near it I’ve been wanting to look for. Got Vega easy enough but really couldn’t find the cluster. I did look at a lot of stars and found the peace that simple gazing gives me. I hopped between lenses a couple of times, looking close or backing up to get a nice view of the milky way.

Later, with the binocs and my star wheel, I actually (and finally) figured out the Southern Triangle. I’ve never been able to identify it (even though it’s very distinctive). In this, it’s like Orion – once you see it, you’ll know it on sight. With a completely clear sky (okay, Moon, that’s enough. You can shut of your albedo now), I could trace it easy. Vega, of course, I knew. But there was Deneb and there was Altair, clearly defined.

I saw on the Stary Sky program (after I’d locked up for the night) that there is a nebula some 1600LY out and somewhere near Deneb. I’m going to have to check that out.

>>>I WAS SUPPOSED TO BE WRITING LAST NIGHT. SEE WHAT HAPPENS? YOU NEED TO BUY MY EXISTING BOOKS – FOLLOW THIS LINK – SO I DON’T GO RUNNING OUT ACROSS THE STARY FIELDS!<<<