won’t say it rained that day. But it was ark weather.

The front hit on our final day. JB had agreed (with some prodding) to walk with me over to the Hudson to see the museum carrier Intrepid, followed by a walk across the city to Grand Central Station (something she wanted to see). She should have argued better.

At first it was fine – we both had umbrellas and it was raining. But was we got closer on the carrier, it came down harder and harder. Soon our legs were getting wet, my arm (from holding her hand) was soaked, it was windy cold. Not a good day to be out. Looked at the carrier, said, yes, it’s a ship, and then started through ratty urbanistic lands for Grand Central. Hoo boy. We had just under a mile to go and it was coming down in sheets.

And she kept with me – I’ll give her points for stamina in the face of the elements. Finally I suggested we find someplace we could go in, get coffee and gather our wits. She nodded agreement without a word. And so, it a bit of serendipity, we found ourselves at the same restaurant we’d had breakfast in our first morning in the city. Just looked and there it was. The head waiter even recognized us. It was my coffee against her hot chocolate, a draw. And once I could study the map, I realized that, indirectly, we could catch the subway a block south, go north, east, then south (two trains) and end up right under Grand Central. Or we could keep paddling.

Our two train rides were quick, easy and warm, and we found ourselves in the Mecca of Railroading (back when travel was a dignified adventure and not something thrown together using poured concrete and questionable bond issuances), Grand Central Station. I had to admit that this was impressive. Poked around for a bit, got some good pictures (there were more people taking pictures that waiting for trains it seemed). Then we decided to walk over to the 5th Avenue Library (famous in just about every movie in New York). 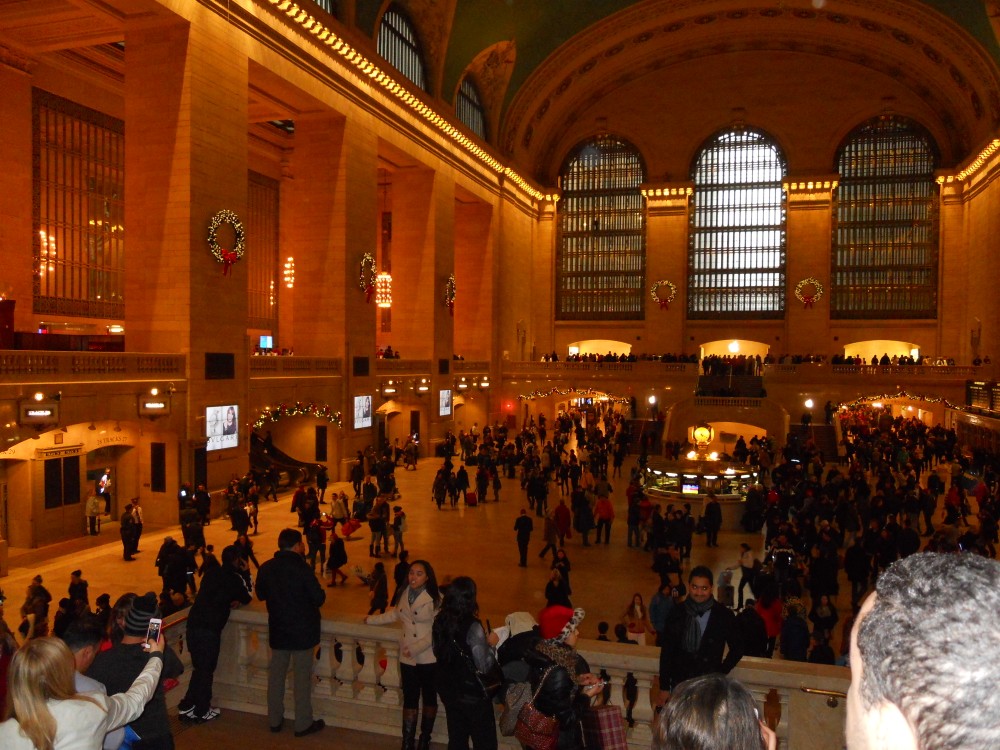 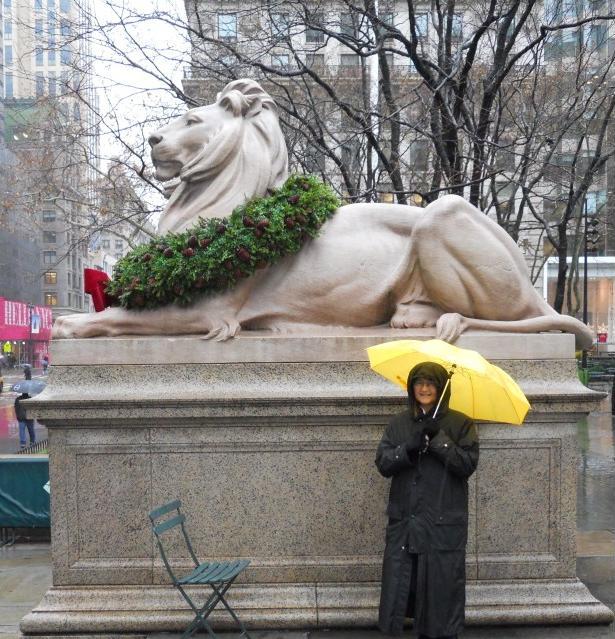 It was interesting. We saw a display that concerned the US propaganda going into World War One. Very interesting and informative (and I took pictures of some of the chicken-hawk books written at the time – hello Project Gutenberg). Once we were done, it was time to meet up with everyone for lunch and decisions.

Lunch was interesting – we were able to find plenty of seating at lunch hour, partially because it was Christmas Eve but largely because the place was a grubby dirthole. The bathroom (in the basement) was appalling and there was a leak dripping through in the center of the place (how many floors were above us?). Still, we managed to get some hot food down and decided that rather than waiting for 3:30 for the luggage pickup and ride to Islip Airport, we’d leave as early as we could – 2:30.

After that, it was a big tromp over (through the rain) to the luggage storage place. The van showed up on time, everything was great, and we were on our way home.

Along with a million other people on the Long Island Expressway. Throw in a couple of accidents and you had standstill traffic.

I’ll give the driver credit – he did his best. We ran in the fastest lanes, then left the expressway to run down back roads, surface streets, whatever got us ahead of the pack. Tick tick tick went the the clock. It began to look like it was going to be close (had we left at 3:30, we’d have been screwed). And finally, at just after five, we got off for the quick surface street run to the airport.

“Fuck,” I said as the train gates came down.

But fortunately it was a quick passenger train, nothing to delay us too long, and we were at the airport at 5:10 or so. Everyone gave the driver thankful graditutionals in the form of cash and then we were in the terminal. Nobody was at the TSA line so we got through fast. Made the flight!

Except that the flight didn’t make us – a broken windshield wiper took our plane out of service.

A second plane was brought over from Rhode Island (nearly two hours later) and finally we got into the air. Orlando felt strange once we’d landed. Sultry night air coming through the open doorways, no bundled travelers, no honking and fuss. Got our suitcases and were in the car and away, hissing down moist streets as the clock ticked into Christmas Day. And soon we were home.

What heaven to wake up in bed the next morning with our cat curled lovingly between us, the window open to admit the warm breeze, the greenery of our back yard rustling, the wet, fresh air (with nobody yacking or honking under our window). It was good to be home.

Anyway, that’s the trip. I’ve got to toss out thanks to sister Pat for organizing it (except for the ride home – shudder!). And to my mom, for coming up with the idea (and financing) of our grand family adventure. It was fun to actually return to New York, to walk through the city and meet its generous people (everyone was actually kinder and nicer than we’d been led to expect). But I’m old, not a young urbanite, and I’ll keep to my old gay suburb, thanks.

And that’s The End.

>>>IF YOU LIKED THIS, CHECK OUT MY WRITING (AND BOOKS). THEY’D MADE A PERFECT REVENGE GIFT FOR ANYONE YOU FORGOT TO GIFT FOR CHRISTMAS!<<<