Night on the Town

Night on the Town 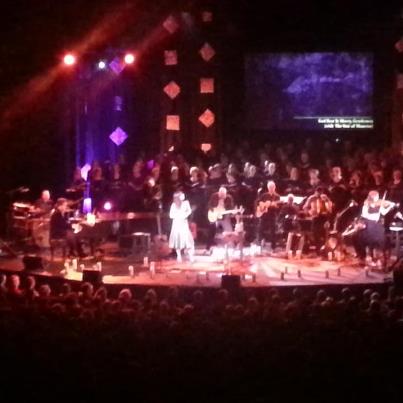 Interesting Saturday night. A work-friend, Diana, invited me to purchase tickets for an event her choir group was singing at. Keith and Kristyn Getty were hosting a performance of Joy – an Irish Christmas. Sure, why not. Got tickets for ourselves and the folks, too.

Little bit of a hiccup day-of-show – Dad didn’t feel up to long walking and decided to just stay at our house while Mom, JB and I went to the Bob Carr (the Orlando Performing Arts Center (you really can’t use “Orlando” and “Performing Arts” in the same sentence, most times). Anyway, Diana snagged us some good tickets – I mean, really good tickets. In the photo below (taken that night by someone else), we are three rows back, and just in front of the piano. I mean, that’s CLOSE!

It was a lot of fun. Very loud and at first a spotlight was hitting Mom straight in the eyes – we switched seats at intermission and that made it better (if it was THAT focused, it must have been a laser – more likely Mom just got used to it  (hi Mom! just joking!)). And we had a freeloader come down, some huge woman who smelled of cigarettes and cough drops, who hacked and gasped after stealing our free seat, under the explanation that “her daughter was singing in the performance”. “Really? So you’re willing to trespass and steal for your daughter, but not lay out big bucks to sit down front?”

But who cares – it was a lot of fun, the music was great, and we got to see everything up close.

And yes, I saw you Diana! Hello!

Funny side story – as mentioned, Dad stayed at our house. My brother was nice enough to come out for dinner and hang with him. We came home and found them watching TV together, with Mookie the Adorable Cat cuddled next to Dad. Both of them agreed that she was a doll, the perfect feline hostess, which was nice.

So all in all, a great evening.

>>>AND IF, LIKE DAD, YOU’D RATHER STAY HOME WITH A GOOD BOOK, THERE’S NONE BETTER THAN “EARLY RETYREMENT”. GET YOURS HERE, IN TIME FOR CHRISTMAS!<<<