ou’ll probably remember how I gas-bagged about facing point locks in previous On-Sheets. These are the blue levers in an interlocking tower that lock a turnout’s points so they don’t shift while a train passes over them. It’s really cool while working a shift in the Tuscarora tower to drop the lock, throw the turnout, and relock it.

In towers, I read how when the lever is pushed back from the operator (standard position), signals are red and turnouts normalized. A lever pulled towards the operator turns a signal green or reverses a turnout. Given this, I naturally assumed that for the facing point locks, a forward lever is locked, and pulling it towards the operator “activates it” by disengaging the lock. That’s what I naturally figured, anyway.

A friend of mine passed away and his widow gave our club all his train stuff. In his library was a book, The Classic Railway Signal Tower by Stephen McEvoy. It’s a fantastic book all about operations in New Haven’s Berk tower. I snatched it up and read it in total contentment.

Startled, I went back through my information I’d had. Some of the manipulation tables I saw (which detail the routes through an interlocking with a list of levers to throw) seemed to back his explanation. With mounting dread, I poured through the internet and found the following video which confirms the horror that was eating at my soul. You can see clearly (after the 3:30 minute mark) how turnouts are locked with the levers pulled forward. Ugh.

Interestingly, the color photos in the Berk Tower book show the interlocking bank with all blue levers forward and everything back. I believe this is because Berk’s interlocking plant controlled a four track main with heavy commuter traffic. No doubt (I’m guessing) that they tend to run trains right through on whatever track it comes in on with few crossovers. To this, it would be natural to leave the turnouts normalized (back) and the locks engaged (forward). So clear to me now. 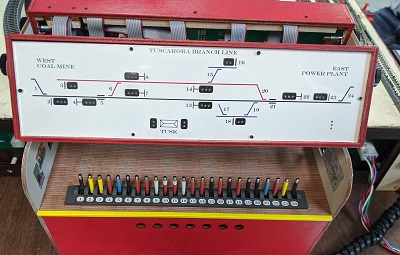 So I’m freaking out right now about this. I’m in talks with the guy who helped me write and upload the software into the Tuscarora’s circuit boards about what will be needed to correct this. Right now I’m guessing that either we’ll have to reverse the toggle wires to trick to system, or change all the LEVER_FORWARD usage for lever 5 and 21 to LEVER_BACK (and vice-versa) or swap the definitions of these levers in the setup to be backwards. Whichever way we go, it’s going take a bit of work to correct this.

But I have to ask myself why I don’t just accept this. After all, most of my interlocking signals have number plates (making them permissive, which hardly ever happens in interlocking plants where most signals should be absolute). I shrug off the number plants.Why not shrug off the facing point locks?

I can’t answer this. Really, I put a lot of effort into my interlocking and now that I’ve actually seen the locks in operation in the video, I can’t unsee it. It makes perfect sense to do it that way. So I’ve got to wait until my hardware guy is back from a cruise to change this. So we’ll see how it goes.

My sister once told me, “You need to pick the hill you’re willing to die on.” I’m fairly certain I’m getting out my shovel to dig a foxhole on this one.