mentioned that at our last special session on the LM&O, we ran TT&TO. Now, TT&TO (or Time Table & Train Order) operations requires that trains run according to the times printed on their timetables. Meets are specified. However, if the dispatcher needs to change a meet point for any reason, he issues a train order to the involved trains passing their stations, giving them rights over what is specified in their time table and rulebook. Generally, an order to change a meet might read TRAIN 98 MEET TRAIN 99 AT SAN LUIS OBISPO.

However, there are two problems with TT&TO dispatching. The first is that the dispatcher needs to know the basic grammer of each order (or “form”, as they call them). For example, the meet order above is a Form S-A, and that is the basic form it follows. You cannot write an order that says AT SAN LUIS OBISPO, TRAIN 98 WAIT FOR TRAIN 99 TO SHOW UP. It is very specific. But you might add more to it, such as TRAIN 98 MEET TRAIN 99 AT SAN LUIS OBISPO AND TRAIN 99 TAKE SIDING. But that’s the rub – to DS under TT&TO, you need to know the forms. I’ve seen dispatchers keep a rule book handy just for some of the lesser-known forms.

Second issue is time. We run the LM&O at 10:1 (which sounds blisteringly fast, but it permits us to run 24 hours of railroad in 2.5 real hours). The problem is that if you do hardcore TT&TO, you should be reading the order to a station operator, who reads it back (spelling out the towns, numbers and directions). That takes time that we don’t have in the session. Even getting an extra train out requires a train order and clearance card. 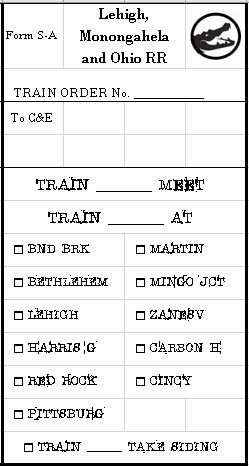 To get around both these things, I’ve developed a checkboxed train order form. Honestly, they look like some sort of unholy offspring of a train order and a track warrant (and I think they are). But they are quick to use – you can copy them out in less than a half-minute. And they are portable – since they are the same size as our waybills (which are pocket-sized) crews can carry them with them (the clearance cards are also this size). The example I give to the right shows an expedited Form S-A, used for meets. You’ll note that all the possible meet points are in checkbox form, meaning all you need to do it write the order number, the trains it is issued to, and the trains in the blanks. Then you checkbox the new meet point. Additionally, you can specify a specific train to take the siding. Easy-peasy.

As I mentioned, you can knock these out fast, and if you put them in a recipe box with tabs, almost anyone can dispatch under TT&TO. The orders are there at their fingertips.

We tested this (as mentioned in my blog about the session) to see how it worked. As it stood, all the trains were rolling through towns on the dot, so no meet point change was really needed. Still, I moved the meet between 244 and 247 to Pittsburgh rather than Red Rock. And since that slowed 244 and would have made a passenger train wait, I tossed out a second order to move that meet point to preserve the passenger’s progress. Worked like a charm.

A charm that didn’t make everyone happy, but hey, that’s the dispatcher’s true and secret job, to make engineers unhappy.

And in that, I was very successful.

Anyway, I hope this gives some of you fence-sitters ideas of ways to do Time Table & Train Order without all the readback, rush and knowledge.