n our last On Sheet, I talked about testing out ideas; my example was my interlocking tower and the control levels (specifically the train order boards). And there, I mentioned facing-point locks.

I did a lot of digging while researching interlocking controls for my Tuscarora Branch Line. I learned all sorts of curious things about them, some I ignored and some I liked. But one of those neat ones were a device called a facing-point lock. I have two in my interlocking tower; you can see one of the levers (blue) in the foreground/left, and one way in the back/right. 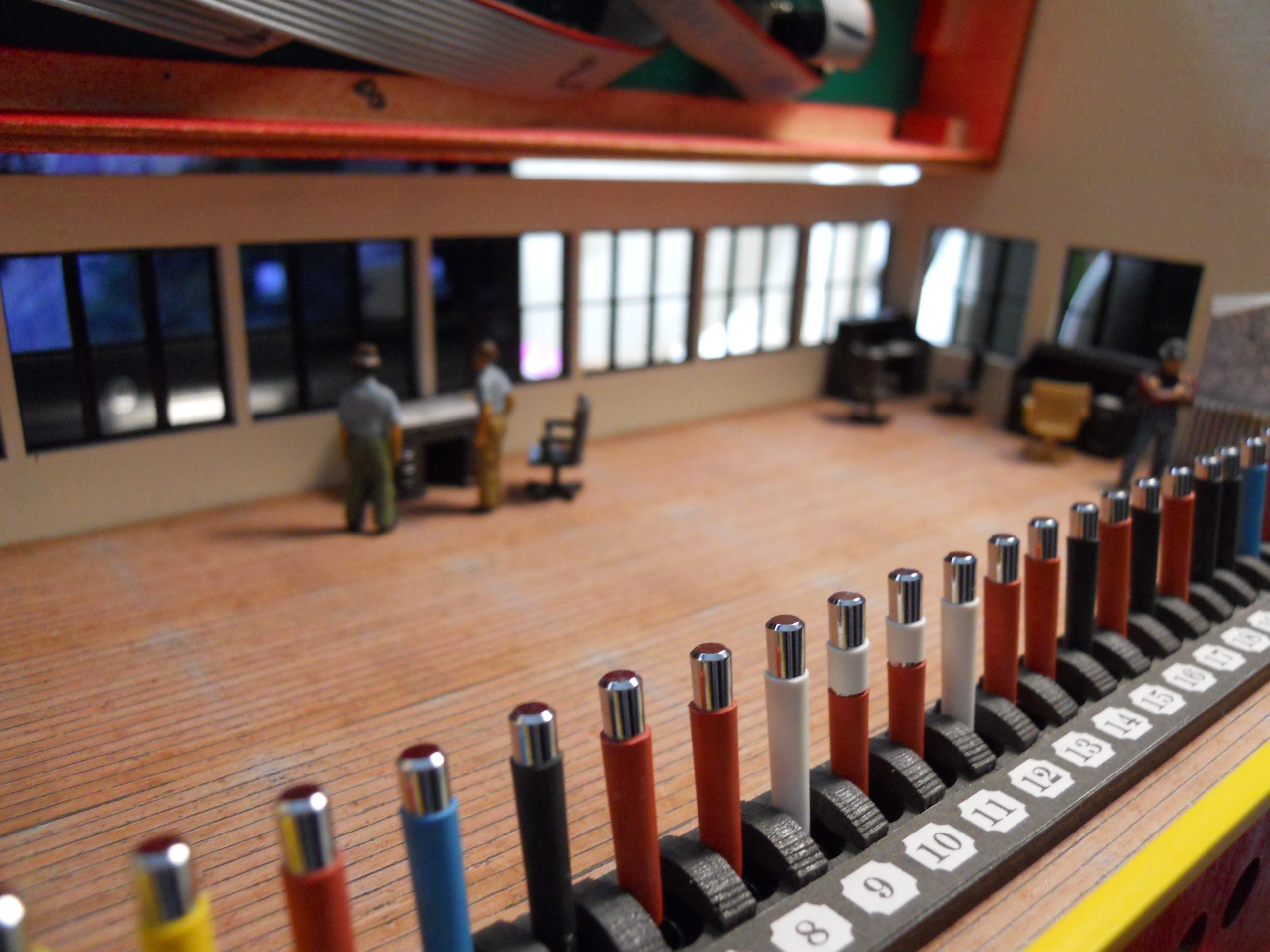 So, as I understand it, a facing-point lock is a vertical pin that slots up through the drawbar of a turnout. When up, it keeps the rattling abuse of passing wheels from shaking the turnout points and possibly allowing a flange to pick the switch (with disastrous, tumbling results). If you are going to throw a turnout with a facing-point lock (in the photo above, the blue lever to the left is associated with the black turnout lever to its right), you need to pull the blue lever back first (dropping the pin), then realign the turnout, then force the pin back up. This locks the turnout in place and allows signals to be set across this route.

So, if you think I’m going to tell you how I drilled a hole through my N-scale turnouts to add a pin to keep the drawbar in place, you are reading the wrong blog. No, actually, these levers do not control rods which push and pull various interlocking elements about. They control software logic. There are no facing-point locks on the Tuscarora Branch Line. But the software acts as if there were. If you try to change a turnout with the lock engaged, the panel faults and doesn’t allow the throw. And if you leave the lock disengaged, you will fault if you attempt to set a controlling signal over this turnout. There is no actual lock. But after busy sessions, my operators feel that there are.

It’s the same as our freight cars that have no freight in them, and engines without crews. There is an accepting belief that these things exist in our miniature worlds. But that’s a little off the point – what I’m trying to say is that you should not simply focus your ops in what is actually physically on the railroad. You can also add railroad elements to enhance the mystique of your line. For example, instead of having a signup sheet when people come in, draw up a “Crew call” document (you might be able to find various examples on the web). When trains leave staging, perhaps there should be a registry book so that crews have to sign their names, trains, and when they departed or arrived. I’ve a friend who has a branch line that enters a supposed mainline – the turnout is locked and needs to be unlocked with a key (in this case, a nine-volt battery that is placed on raised contacts that active the turnout). Some branch lines have a physical staff, allowing the bearing train to enter and all others may not – put a key-chain-sized staff near the entry to the branch and make the operator carry it with them.

There is no end to railroad paperwork and processes to simulate. Sure, they don’t really mean anything or change anything, but they give us the idea that they are actual elements of a working railroad.

Who knows – maybe you should make all your operators pay you a buck for union dues every session. But watch out that they don’t file grievances against you!