few days ago someone asked me why I call this blog “On Sheet” in the first place. Fair question. Let’s take a break from ways to get our tiny boxcars to our tiny industries and chat about how railroads work.

Or worked, as in past tense.

You might have a small station on your railroad, one with a bay window and a semaphore signal out front. You might have assumed that that signal is to make trains stop and go. So did I until I bumped into Steve King and he got me into the religion of Time Table and Train Order.

In a nutshell, TT&TO (as it’s called) was the mainstay method railroads used to dispatch their lines and keep delays (and accidents) to a minimum from the mid-1800’s until the 1960s, until electronics and radio coverage improved. Trains know where they should meet other trains (on their timetables) and rules define how trains rank compared to each other – if you are an inferior train and are not going to make your meet, you pull into a siding somewhere else and get out of the way. Crews have a great deal more responsibility for their safety and progress.

The only way the remote dispatcher knows where a train is by reports by station agents (sitting behind those bay windows in your station). They are the ones who note a train approaching and from which direction. If the dispatcher needs to get a new order to that crew, the station’s train order signal is dropped and the train either stops for those orders (or, dramatically, picks them up off a hoop as he passes through). But the critical thing is the station master, who notes the train number displayed on the high call boards on the passing locomotive, logs the train into his paperwork (putting it “On Sheet”) and then calls the dispatcher to note the event – “OS Train 312 at Woodford, 8:05 AM”. And now the dispatcher knows where the train is. 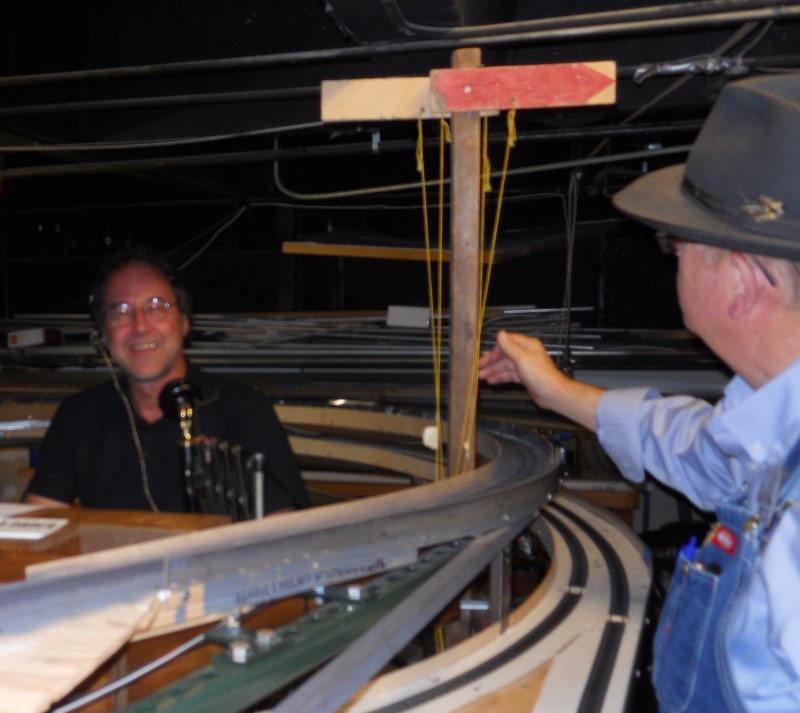 The author working Tehachapi station (inside a loop of track). Note the scissors phone before him (you can’t see the piles of paperwork). The highly detailed train order signal is to the right.

This sort of operations are great fun – as an engineer, you really find yourself trying to picture where all the trains are and if it’s safe to proceed. The best place to operate this way is San Diego’s La Mesa Club in Balboa Park. This is a twenty-five scale mile HO railroad that runs under TT&TO on certain weekends. I’ve had a chance to work as a station operator in several locations, writing orders on carbon paper (so the same order can be given to all impacted crews) and OS-ing trains past.

In some later piece, I’ll talk about how we OS trains past on the Tuscarora microlayout. Yes, the interlocking tower double-duties as the station operator, and he OS’s trains to the dispatcher (sitting four feet away).

This hobby. There is so much to learn!