On Sheet – The Straight and Narrow

On Sheet – The Straight and Narrow

p front, I’ll admit that railroads made most towns. The rails would come through, the depot would be built, and then “Railroad Avenue” would parallel the line. The town grid would firm up off this, buildings in line with track, everything lain down as if on graph paper. Historically accurate? Sure.

Too often, small railroaders with limited space instinctively snap their sectional track on a bead two to three inches from the forward edge. And their town naturally follows, with ninety degree corners in the streets, everything placed to parallel the sides of the layout’s edge with geometric precision. They even do this when they have extra space, where they could run the main at a slight angle. Instinctively, they don’t.

If you haven’t locked down your track and have some lengths along with a spare building or so, try this – place them at a slight angle to the forward edge of your table, say 20 degrees or so. Put down the buildings aligned with this alternative right of way. Add some rolling stock. You gotta admit it looks pretty sexy, right?

Orlando N-Trak, which I’ve been a member since trains were windup, learned this in the practical way. Our first modules were early N-Trak standards: three lines running parallel to the module edge. You might be able to sway the roadbed if you had a couple of dedicated modules but for the most part it ran straight as an arrow for the entire layout’s length. And it was dull. Dull to look at. Dull to run.

When we got rid of our modules and built new ones, we discarded the N-Trak standards. The new line (a double track formed by a pinched dogbone) ran from the front of the modules to the back, going through sweeping curves. Now trains were not just going left to right, they were sweeping in or fading back, passing behind scenery. Suddenly it was much more exciting.

My home layout, the Cuesta Grade, uses this principle. The town of Salinas is only four feet long and only one wide. However, I sweep from the back left to the front right. As you can see in the photo below, an ordinary scene is even more dynamic. And yes, even though the town follows the principle of the main street paralleling the main line, since it’s also at a slight angle, the entire vista in interesting. 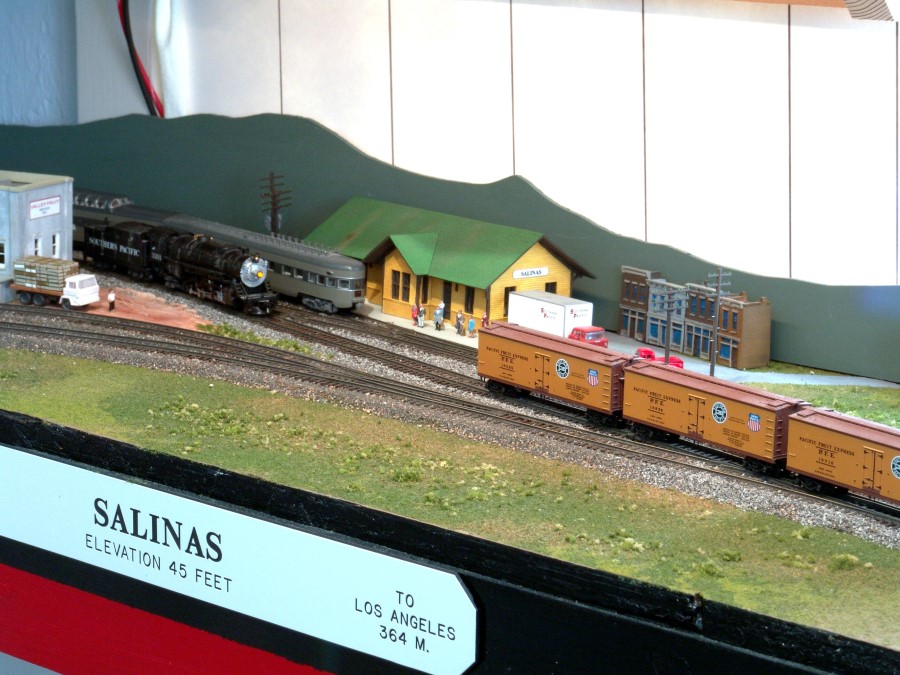 The Lark passes through Salinas while a rusting mikado assembles PFE reefers on the passing track. Notice that distance between the main and the forward edge of the layout. The station is the give away – the leading edge has a complete roof, while the left-most side is only half a roof.

People will call me a hypocrite because my other layout, Tuscarora Branch Line, runs like a bullet right along the layout edge. Sure, but then again, Tusk is also only two feet by four; I could hardly get it to fit without ramming it into each corner. But where I could, the sidings (and their industries) are at angles to the main.

So think about this. Before you lay your track with that straight edge, think about some sweeping curves and non-parallel lines. You will be stunned by how much better everything looks.