Not this session, but the same cast of characters.

Lightning boomed outside the windows. Hunched in their seats, the two men struggled to keep a mulit-engine explosion from happening. They fought with their controls, the switches on their consoles unresponsive, even haywire, their radios filled with static, the voices on the other end indistinctive against the ether. Sweat plopped onto their crumpled working diagrams. Suddenly came a total power failure, the screens black, the drone of the distant engines winding down.

Then the host entered the room. “I shut off power to fix a broken turnout. Lunchtime.” 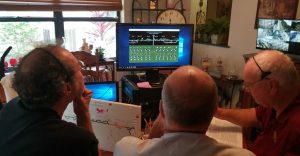 Yeah, it was that sort of an ops session. I wasn’t talking airplanes above, no. This was what was going on in the two-man dispatcher office where Tom Wilson ran the Southern Railroad and I the L&N. The radios had issues, the room was full of chatter, there was a thunderstorm. Tom’s radio volume kept fading out. We were both running things off a shared switch panel that still has, um, features. We’d activate one turnout and another (usually under a train) would throw. And we were both trying to keep track of all our movements, not on the unrealistic magnetic board but on time sheets (where you track trains across your division and keep them from ramming others (if you remember my piece on vertigo from last week, it’s far greater here. Eventually you have a wide sheet filled with times, lines, arrowheads and expletives – it looks like something crazy people in crime dramas fill the walls of crummy apartments with)).

But nobody crashed (at least none the L&N side). I moved twenty-two trains under sixty something warrants under a four-hour session. And we had fun. With all this going on, we kept two intertwined railroads running. Even when we plugged the yard. Even when a train passed a fouling point and got scraped by another in Ramsey Tunnel. That railroad moved. And we have a lot of fun doing it.

Great time with a great crew. Thanks to the host, John, for having us and the engineers for putting up with us.

Can’t wait until next time!

>>>HEY, BOOKS FOR SALE HERE. DON’T MAKE ME DO ANOTHER AIRPLANE ALLEGORY TO SELL A COUPLE!<<<