t’s a long haul over to Rockledge on a work night – 53.3 miles to be exact. And this is to run a layout so small, only four mainline trains get to cross it. (That’s like 25 miles of driving per train run – whew).

But Kevin Loiselle’s Boston and Maine gets around these small room limitations. While some modelers talk about details in terms of handrails and bells, Kevin thinks in terms of ops.

When the Bellows Falls switcher comes out onto the main, he has to physically unlock (with a key) the turnout controls, then call the dispatcher to unlock the circuit.

Cars get weighted by a car scale, and overloads are returned to the industries to be corrected. 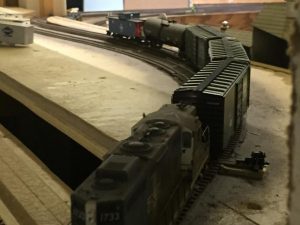 The dispatcher moves his four trains using a full train sheet, recording conductor names, engine number and number of cars when the train starts out. After catching times across all four stations, he then has to capture the ending number of cars and time off duty. When I was done, eight busy columns (four trains, and four appearances of the Bellows Falls switcher onto my main), packed with numbers, turned my sheet into something that might have been produced by an accountant on speed.

Yeah, I was busy. And I was using all my dispatcher knowledge to work trains across the division. Mother-may-I this wasn’t.

So was it worth the drive? Easily yes. It was one of the best opening sessions I’ve had the pleasure of attending. Great job, Kevin!

>>>AFTER ALL THAT PRAISE, HERE COMES THE BOOK PLUG. CHECK OUT MY NOVELS HERE!<<<