To be or not TOFC, that is the question.

The Chicago, Denver and Pacific is big. Bigger than big. Bigger than you can imagine. It’s frankly the largest home layout I’ve even seen. Remember what I said about the TC&C yesterday? This one’s bigger. 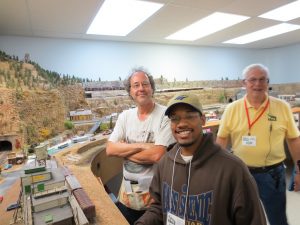 Jared, Me, and Joh – my train is on the highline in the back.

I was running Train 41, a combo of coal (on at Denver) and limestone (to add at Sedalia). I was on the approach to the latter, walking allll the way down to the end of the long room, before walking down the other side, allllll the way back. I was unfamiliar with the layout so with all the tunnels, it was touch-n-go as to where I’d pop out. Went into one tunnel on the middle track of three. Walked further up the room and found a TOFC (trailer on flat car) train sitting on the middle track coming out of a suspiciously-familiar-looking tunnel. The engineer was getting cars added way up in Pueblo, but his 40 car train was hanging back into the tunnel.

Was it on my track? Was I going to hit him?

Since I couldn’t see my engines, I slowed down my train and hit the bell on the sound system, putting my ear to the mountain, listening carefully. I could hear it faintly ringing, getting closer to where I suspected the tail end of the TOFC train was. Finally, I stopped – I didn’t dark gamble with a subterranean cornfield.

I finally managed to find a tiny unfinished hole in  the scenery and peeked in – sure enough, my lamp was illuminating the TOFC caboose. Called the dispatcher and mentioned it and he apologized. Oh well.

Finally the flats began to roll – leaving us to discover that the dispatcher had thrown the turnout to Sedalia under it, toppling those always top-heavy cars half inside another tunnel. With a friendly smile, I helped its crew rerail and eventually get underway.

I’d pulled into Sedalia and was tacking on my covered hoppers. By then, the TOFC I’d aided earlier had wended its way through several rooms and two feet higher. It came boring out of a tunnel-bridge right overhead – the engines, the first flat, and then the second – wheels rattling on the ties, trailer swaying. As I watched in horrified fascination, the flat detached from the train and fell, guillotine-like, to smash into my caboose. So with a weak smile, I helped him collect his cars and trailers and rerail them.

Just as I was finishing this up, another TOFC train passed on a different level, somehow clipping a tunnel portal and clotheslining. And now at least four cars were on the ground inside the tunnel. We fished them out (and I had to slip an arm down the portal, to grope out a few tossed trailers). With a forced smile, I put another train on the track again. I had been rerailing tractor trailer cars for thirty minutes now.

The rest of the run was a lot of fun.

I met no more TOFCs.

>>>FORTUNATELY, THERE ARE NO TOFC’S IN ANY OF MY HISTORIC DRAMAS. THANK GOODNESS. YOU ARE SAFE TO BUY ONE<<<