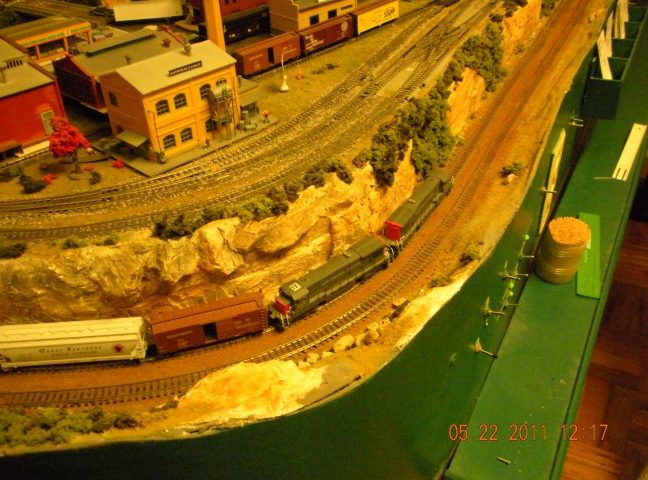 I’m pretty down as I push the throttle to Run 3, getting the cut of colorful billboard reefers moving out of Chicago, my SP geeps clattering west over sunlit rails. I’m through Proviso, banging over the switch points, swinging onto the left-running main. As the train strings out, I sort through my waybills, not that it matters. I’m train 105 west, last train of the session, last session for this layout.

Richard’s downsizing from this house, moving to an apartment. No room for this pike. 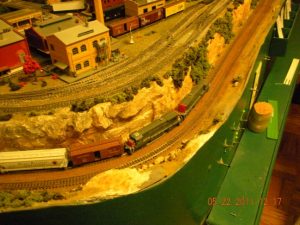 I’d like to say I was somber, that memories were flashing through my head as I passed each scene but that would just be over dramatic – I’m actually chatting anecdotes with the Chicago yard master, just running easy. I do take a moment to look at the rocky cut at the edge of the layout, one of my better rock-carving efforts. I rode over on the bike for a couple of cold nights, working to carve a neat cliff face on a curve that kept hooking long passenger cars. So I’d carve deeper clearances and accidently punch through the back. Add more plaster behind, let it sit, carve deeper. In the end, it really came out good. It looked like it was actually blasted through the rock, which, in a way, it was.

A couple of lazy loops of the mainline and then I toss the switch to enter Cheyenne. Though the ladder, slow, and roll it down to the end to clear the turnouts (not that it matters – everything in the yard is shortly going into storage boxes). Bring it up nice and easy, drop the loco from my throttle, fetch up my lunch box, open the door, climb out, and crunch away across the yard cinders. Don’t look back.

I’ll miss these runs. Thank’s for the enjoyment, Richard.