keep telling myself that I need to write a fun piece about the Florida East Coast where we ran operations today.

But the owner/dispatcher looked exhausted after the session – he’d not dispatched in over a year. On the line we had ten operators from Orlando N-Trak, and even with our skills on the LM&O under warrants, this was an away game and the first time for these guys. The room was tight, nobody knew where anything was and how to do anything, and at one point the rain was hitting so hard I felt like we were going to get flash-flooded (I was waiting for the microburst that would flip the shed) (and to be mangled in mid-operation-session, well, that’s how I’d want to die, at least). Yeah, rough time. 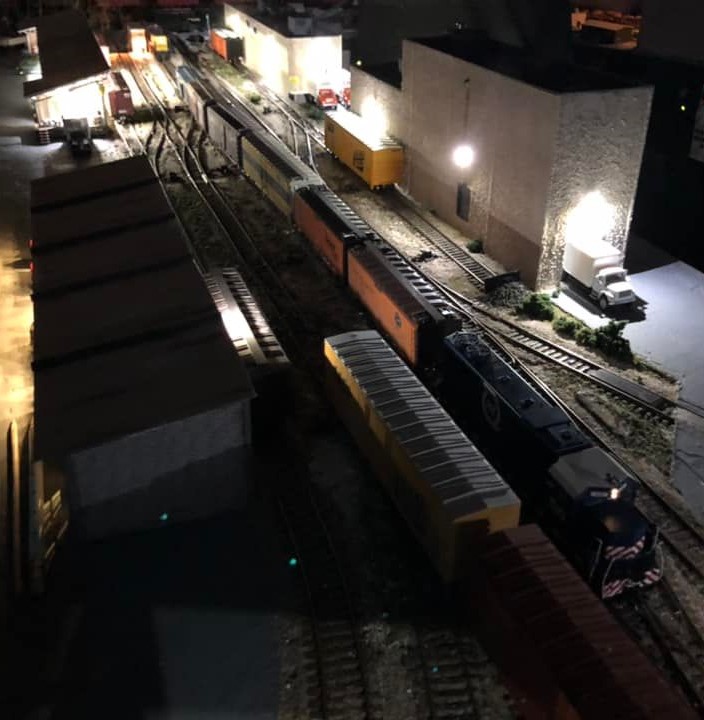 Early morning in the packing district. Soon the reefers will roll in and things will get hectic! (Photo: John DV)

But let’s get real:

Sure, the room was tight but the crew didn’t whine at all about it. I observed people giving away and moving aside, and even spotting cars and throwing turnouts for each other. As for learning the system, well, God knows where we might have sent some shipments, but by the end of the session everyone had spotted a car or two (or twenty) and know what they were doing. While there was a lot of red-signal running, that was more due to the fact that the guys were not familiar with signal locations – they know where the posts are planted now. And as for the rain? Well, the tie-downs held and we didn’t end up in Oz.

And at the end of the session, everyone was wearing smiles. Weary, gap-toothed smiles, but smiles all the same.

As for the dispatcher, well, maybe in couple of sessions he’ll get the line figured out and earn his seat. We’ll see.

But yes, a great time for the club and thanks to the Farnhams for hosting us. Hopefully our guys can get spots on the roster for the next session. Everyone wins!

Well, except me. I spend the session running about, explaining things and rerailing cars. But then again, watching the club have fun is fun in itself! It’s like watching puppies playing.

Cocoa Yard – a busy rail hub that separates the men from the boys. And the rain is coming in… (Photo: John DV)