uite a crazy day (and night) on the Florida East Coast.

Worst bit – in mid-session in the yard shed, there was a turntable fire which filled the room with fumes and knocked out the table. The table itself, normally able to be lifted off, seems welded in place. That really sucks – I’ve run the hostler job and really like the table.

Out in the main room, there were the usual issues, including a train getting stuck in the runnel and one operator determined to run through all our defect cards (and that would be Kyle, who scored three detected defects in his passes under “the hoop of death” (he would have scored more but we limit the fun to one-per-train – he actually got one or two doubles)). Another operator (Greg) stacked up a couple of demerits for goofs (though I do know that someone else was leaving turnouts open all over the place – following trains kept picking up red boards and having to walk the track to find the reversed turnouts). And me – well, I knocked a button cap off the board, but Ken managed to find it and fix it. Oh, the shame.

The operators might point out that for five minutes, I wasn’t available (while Ken and I were looking around the floor for the button cap). So sue me.

Even JB, who runs her yard by the book, got confused when we readied a train to exit out the arrival track while another was on the departure rails – she didn’t know who she should call first and what order they should go out. As I told her, she just needs to get engineers in their seats – I’ll run them out in the order I choose. No big deal though.

But this is all life on the railroad. Yes, for all the above carping, we did have a great session. We ran everything, we kept somewhat to the timetable, and in the end everyone was smiling. That’s all you can ask for, right?

Our only real issue was that a newbie engineer didn’t get his report-to-duty email – we didn’t know until the superintendent was asking for him and Kyle and I were left looking at each other. We didn’t realize he had been accepted and he had assumed he hadn’t. So, shit, we were down a guy and that guy had really wanted to attend. Next time, we’ll confirm our roster before it’s too late.

But yes, outside of the property damage and our crazy defects and the radio crackling like a bag of crushed corn chips in my ear for a couple of hours, we all had a great time. Looking forward to the next one.

>>>THIS SITE EXISTS FOR SELLING BOOKS. MAKE ME PROUD. FOLLOW THIS LINK<<< 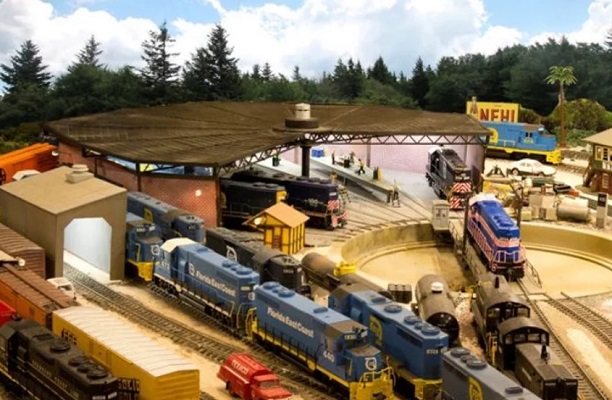 The Late, Great FEC turntable. We will miss your slow swing and good indexing. Let’s hope the railroad can replace you!