ough start to the day – got in a tiff with the crew caller early and ended up reading a book in the lounge for two hours. But then I got a train which was a real sweet run – over the hill with a minimum of fuss (except for a thrilling run-for-a-siding banana-drama). And afterwards I spelled the Caliente station operator so he could go get lunch (even had to write out a fumbling order). And that was exciting. Why?

What station operators do: In ‘Time Table & Train Order’ operations (the method railroads operated for over a hundred years) the station is key to everything. See, unlike today, there is no direct communication with trains – radios are still dodgy in the 50s and can’t be trusted. So to send commands to the trains, the dispatcher has to communicate (dictate) orders to the stations (who carbon copy them and read them back, spelling out all train information, towns and such (literally) (so “Extra ATSF 170 West” is read back as “Extra – E – X – T – R – A – ATSF 170 One Seven – Naught – West – W – E – S – T”). If the order is deemed correct, the operator sets his train order signal (the one just in front of his bay window at the station) and those orders are hooped up (on a Y-shaped stick) to passing trains or the crew has to dismount and pick them up. The station also communicates with the dispatcher as trains come through, reporting numbers, flags and times. Add listening in on other communications and fumbling with carbon paper and you’re pretty busy.

At 2pm, the crew caller was looking for station operators. I almost didn’t step up – I’ve only done a short shift at Woodford two years ago and a very short stint listed above. But I really needed to take this on so I put my hat into the ring. When asked where I wanted, I told him somewhere quiet – yeah, let’s do Tehachapi.

Tehachapi (noted at length in my last blog) is located just shy of the summit. Trains arrive westbound from Mojave on double track (allowing for rapid transit both directions, none of that siding nonsense). All helpers (both ways) are removed at Summit (part of my area). Those needing to be turned are rotated on the wye. Going east to Mojave is a no-brainer – they get a clearance card and ride ABS-protected double-track home. Those to Bakersfield get grouped into cuts have to get orders and transition twenty mountain-miles west.

There is a bit of a gut-churning moment when you take over a station. Tehachapi station operator sits inside stacked loops of track, rather distant from its actual location (it’s visible end-on twenty feet away). In front of the seat there is an old wooden desk. In pigeon holes, you have spare pads (orders and clearance cards). You also have a load of pens and a lot of carbon paper. On the table before you, there is the log listing all trains recorded through. An old-fashion phone on a scissor-arm sticks out towards you, there is a heavy headset on a peg and on the floor, a pedal-mike button – push to talk. Bolted somewhere nearby is a buzzer that the dispatcher can use to alert you. And mounted to your left side, a high signal mast (representing the order board in front of the actual station). Two arms, one for each direction: raise to stop trains, lower to pass them. 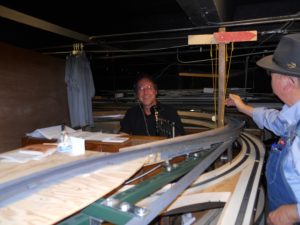 But so much for my thought that Tehachapi would be a quiet place. Westbound traffic has log-jammed my station. On the two forward sidings, a Pacific Fruit Express block (a long mother) has doubled across both tracks. Disturbingly, it was the same crew I passed when I went into Mojave three hours ago – they made it to the summit and got stopped. Behind them on a stub track is the Mountain Local, its crew fuming at the delay. Also there are two blocks of helpers (Santa Fe and Southern Pacific). So I have a bunch of crews glaring at me, somehow thinking that I, a newbie operator, have any pull with the chief dispatcher and can advocate their speedy advancement. Right.

So I sit and calmly (look at my hands shake) leaf carbon into my order pad. Most orders to this station will be singular but I still need to maintain a copy here. Through the headset, I start to get an idea of what’s happening. As usual (again, in my last blog), there are a lot of freight sections coming east, all those 800-series moves and that’s locking the railroad down. I can hear the dispatcher hammering orders out to lower stations, trying to move things west. I’m about to get a baptism of fire.

BUZZZZZZ! goes the alarm. “Tehachapi”. “Tehachapi, multiple copies to all westbound trains”. Like, WTF? I’m shoveling carbons in. I manage to get five in place (one, it will turn out, is upside down so I end up writing in reverse on the back of one copy while leaving the next blank – I learn to always test the pad with a tiny mark going forward).

All westbound trains? I dutifully write it down, tear off all the copies and show it to the waiting crews. “Does this get any of you out?” They all look at it and ask that it be included in their paperwork that will be issued. But still nobody can move and nobody can ask for clearance yet – there is a missing eastbound freight overdue, pinning everyone. So we wait. I try to ignore the grumbling, offering a sad smile and not much else.

A lot of time passes.

I tell this to the crews. Cheers break out. The missing train is through the next westward station, coming towards us. And with the gap between that and number 52, a lot of engineers are licking their lips and rousting their crews. Affected by this newfound optimism, I call the dispatcher and ask if we can cut some clearances. “Let’s see how this goes,” he dryly responds.

And so we wait. And wait. Train 806 should have been through. On a quiet moment on the line, I call directly down to Woodford, confirming his earlier OS. Yeah, the train’s been through. And… do I want to know what’s going on?

It’s nice he asked – he can see things in the layout area he couldn’t in real life. He’s offering me information neither of us would really have. No, I tell him, we’ll wait. I don’t want to know what’s going on with my missing freight. We’ll play this fair. Besides, the suspense is fun, too.

But I can guess – he should have been by already. Eventually a westbound passenger train comes along. I prep up a clearance form for the order addressed to all westbound trains, hoop it to him and OS him past. Now I know for a fact that 806 must be on a siding, either Cable or Marcel. The coaches snake around me and head west. The clock ticks on. Eventually number 52 shows and passes by. All those carbon copies I wrote – wasted. With a sigh, I call the dispatcher and confirm I can destroy all those “All westbound” orders. He agrees. And into the trash they go.

Eventually the overdue 806 comes in. My buddy Bill is back in the helpers. We greet each other – he tells while waiting for the forward helpers to cut out that one of their engines was having all sorts of problems and they went onto the siding at Marcel to screw with it and decided not to run ahead of the varnish with their dodgy power. Fine for them. Bad for me and all the crews hanging around. That killed our chances of getting all those westbounders out.

Outside of the Mountain Valley local that mutinied (the engineer stormed off), the PFE string hung in for six hours for paper. Eventually we managed to get specific rights won for them over facing traffic. I was sad to see them go but happy for their freedom – their long line of orange reefers rumbled around me like a python, westbound with rights over everything to Allard. Then more orders to me and Kern – Bakersfield was getting short on helpers so we had to move them west. The orders I was reading back were a mouthful – some of them addressing five trains at once. However, my time dispatching under warrants really paid off – once I was done worrying about my abilities; I could read-back quick, even faster than some of the other stations. Soon enough, we were cutting clearance to both helpers, an experienced guy going out first, Bill (who’d run down to Mojave and taxied back up to run SP units west) second. My only mistake came here, with the second helper set – the first I officially cleared with the dispatcher. When he told me to clear the second, I misunderstood (using the technique I used to clearing trains that ran up too quickly on my order boards). But the dispatcher was cool – he corrected me with a sentence of explanation and we continued on. I watched the helper sets vanish west.

About a minute later, Woodford crackled onto the line. “I just got a callbox yell from Passenger 4. He says he nearly ran over two helper sets coming down through Marcel.”

There was a moment of panic for me – had I screwed up and headlighted helpers into the face of varnish? I checked the timetable – yes, there number 4 was, bold as brass and clear as day, due up at 7:04pm.

And then I realized, no, not my fault. The crews had been too focused on orders and forget to check their timetables.

“Who were on the crews,” the dispatcher asked. I checked my notes and gave the names. “The other guy, I don’t know. But <OMITTED> should have known better.” Yeah, I thought the same thing. Bill had picked the wrong guy to follow out. Sorry, Sparky. Welcome to railroading.

What I hadn’t realized was that there were helpers up the wye, ones the crews hadn’t moved down. So egg on my face when the dispatcher cut all those orders to move helpers out of Tehachapi and suddenly three more are on the westbound holding track. I called and mentioned this, getting an icy silence back. Told him that we could move them “next shift” (since we were within an hour of closing out). I explained that I didn’t know they’d tucked into a scenery pocket twenty feet from my position and hidden from my view but he really didn’t care. Yeah, he’d had a hard day too.

With Tehachapi clean except for a couple of standing engines (I dismissed the crew) and an abandoned local, things went pretty easy. Several of the eastbound freights paraded past and a westbounder was grinding up. I was all ready to OS them through when the dispatcher suddenly reported that he was off duty. I checked my watch. 8pm. Six hours had swept by in a blur.

And only now, while reviewing this and thinking back on things, I realize that I forgot to write my “out time” on the sheet. Dammit, but I really wanted to John Hancock it. After all, it had been a really fun job.

Next year, I gotta get a station seat again.

>>>SOME ADVICE – IF YOU EVER FIND YOURSELF ON THE FRONT END OF AN EMPTY REEFER BLOCK HELD IN TEHACHAPI FOR HOURS, MAKE SURE YOU BRING A BOOK. MIGHT I SUGGEST MINE – FOLLOW THIS LINK TO THE BLOG GIFT SHOP! AND IF YOU HAVE MY BOOK IN YOUR BACK POCKET, I’LL ACTUALLY PUT IN A WORD TO THE DISPATCHER AND GET YOU MOVING<<<