t’s said that no plan survives the first contact with the enemy. It is also true for timetables surviving the first day’s operations.

So Orlando N-Trak attempted something few clubs have ever tried – we ran a Saturday Night Special session under Time Table & Train Order. This (as you know) is the method used by most lines from 1840 until 1960 (or later). Essentially trains proceed by rights established by class and direction, making meets at established locations when they can, and earlier (if facing superior trains) when they can’t. And extras? They need to swim upstream keeping an eye towards listed opposing traffic. 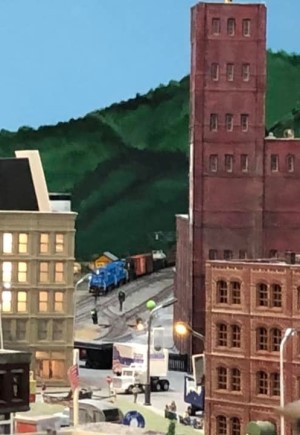 Since I knew this was going to be hectic, we tossed away the idea of dispatcher and I took the position of roving superintendent, assisting when needed and answering questions.

And you know what? It really worked.

We started at midnight, with half the room lighting out to establish a nighttime feel. That seemed to work well enough with trains grinding through their paces. However, within for opening moments I was already hearing from Shannon how my time for his run to Calypso was way too tight (it was). Worse, a little later I was nosing down one of the aisles where Ben and his guest Taltha were holding 244 in Carbon Hill. Not because the timetable indicated a meet but because they’d been sharp enough to spot that 223 would plow into them if they proceeded down the Harris Valley. You’ve heard of Mystery Meat? Well, this was a Mystery Meet. I’m standing there while they are explaining this, and then I look towards Zanesville and sure enough, 223 is popping out of the tunnel near the falls. How did I miss that?

The same way I missed the other two meets neglected in the timetable. All I could do was mark them for the upcoming TimeTable 2.

But overall the crews ran fantastically. Everyone stuck to their schedules, everyone made their meets. The helpers (and one extra freight) moved fairly safely across the division under their white flags – and yes, the club president’s idea of slipstreaming 97 would have backfired horribly had he attempted it. The crew of 97 tipped him off that if he tried this, he’d get a facefull of 244 just short of Lehigh.

223 enters Lehigh with helpers on the head. Notice the moody room lighting and the lurking Superintendent. (Photo: John DV)

We even ran two sections of passenger trains, with all three meeting at Bethlehem station, a cool moment indeed. Overall, the effort of running TT&TO paid off. The phones stayed in their cradles and the crews moved forward under the authority granted them by the timetable (the fools, given the number of easter egg meets I’d slopped into it).

But it was a lot of fun, a real crazy way to run a railroad. And from the debrief comments, I think we’ll try it again sometime soon. Don’t miss it!