Father and Son scrape paint in Calypso. Photo: B Wajda

“Boomer” is defined as a railroad employee who goes from job to job in a short time, constantly working on different trains and positions. That was pretty much me tonight.

Got there early and set up a passenger train, and put some engines in the yard for any locals that might open up. Then someone said our dispatcher wasn’t showing tonight so I’d have to take it. Then Shaun said he’d take the DS desk instead of running Shelfton. Fine – I wanted a local. So I rolled down to Shelfton at clock-hot, working out my first slick move of the night, only to have Don show up and claim his seniority in position. Okay, so I was back off that job. No other locals were available but the Mingo crew was new so I threw in with them, working through their paperwork and answering side-questions to others while also making sure all the visitors got footplate experience. So yes, it was a busy night.

Dispatcher Shaun was thrown off the cliff to see if he could fly – he’s only run a half-panel before and that was a year ago, pre-pandemic. And he had his hands full, dealing with a full division of warrant requests from impatient crews. I won’t say we ran on time – a number of trains were slipping in later and later into the hole. And I can personally attest that when the Mingo Junction Local rolled out, it was only because the engineer was running slow that we didn’t pop out in the path of Silver Bullet 2, whom we shared authority to the same piece of track in Lap-ish fashion. As he roared past us while we toiled out Martin, I thought, “Crap – that’s our track!” Oh well, nothing got broken. And really, everyone agreed that for a newbie dispatcher under a full division, Shaun did well. Well enough that he’s now in the DS rotation. Hooray!

My friend Brian and his son Tyler came out and ran with us; they seemed to have a good time. I was told there was a bit of a near miss in the yard. Didn’t have the heart to explain that yard operations are the responsibility of the crews. If I really wanted to be a hard ass, I’d ask who their conductors were – those are the train bosses and would be called onto the carpet for bent handrails. But again, no damage and all in fun. 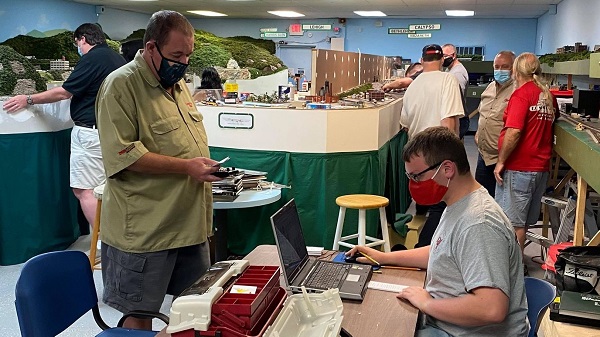 So a busy night on the line – six freights, four locals, two coal drags, and two passenger trains (the latter hardly count since they were so very late). But a great night – the layout ran well and other than some minor problems and a near-miss or two, we all had fun and kept the blood in our bodies. Nobody died.