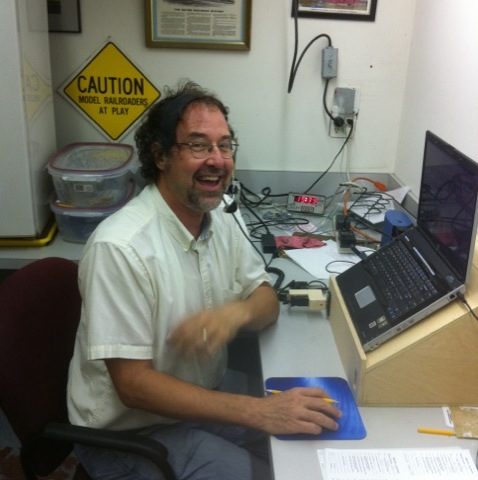 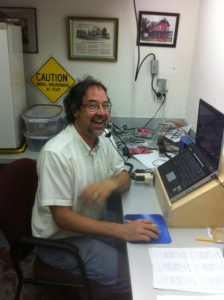 Punch-drunk after moving 14 trains across the summit

It’s a lot of work to set up for a model railroad session at the club. We’ve got 15 scale miles of mainline, which doesn’t include all the industrial and yard trackage. We’ve also got to put member’s engines on six freights, four passengers, three locals, two coal moves and perhaps a few unscheduled extras. We’ve got to clean all the rails, get the power up and checked, hook up the dispatcher computer, sync the clocks, activate the phones. And we’ve got to agree to an equitable distribution of crews, so everyone gets to run what they feel like running. Quite a tall order with only thirty minutes to do it.

I was in the back doing the computer, getting the phones up, activating the fast clocks. Members are coming in, nosing over the signup sheet, picking their runs, setting out their engines. Other guys are using rubbing alcohol on the tracks, buffing away a month’s corrosion. The yard master checks his cards. The club electrician clears the boosters. Twenty guys are doing what needs to be done, moving from job to job like ants. I dunk under the layout to clean the spiral tunnel that’s hard to reach. A helper crew lets me know that he’ll be boosting all regular tonnage over the Harris Glen tonight. The engineer of Silver Bullet 1 tosses a sarcastic comment about the new timetable. I check the Martin yardmaster: he’s ready. The first freights are reporting hooked up. Someone asks a question – an over-the-shoulder answer as I head for the back office. On goes the headset. I call for a radio check. Train 202 gives me a five-by and asks for the first warrant. I punch the hot button for the clock, confirm a minute’s fast-passage, dictate the first order while writing it out. “Warrant one to train 202 east, Cincinnati, checkbox two: Zanesville, checkbox six; two boxes checked”. Here comes the readback and the whirlwind starts.

These are my guys. Unlike elected representatives, fellow drivers and coworkers, these guys know what to do. We’ll move lots of trains tonight…