n the bad side, there were a number of near collisions, several (that I knew of/experienced) LAP orders, some running without paper, a lot of phones clutched to numb ears, a big boo-boo in the yard, and a passenger train that ran a half-day late.

But on the good side, we did run all the freights, all the locals, all the coal and ore, and got to experiment with delivering cars to the Nazareth turn (well, now we know what doesn’t work). We started a little earlier and had a lot more people working throttles at the end. Everyone (outside of the dispatcher, I’m guessing) had fun.

And that’s the goal. Even Gomez Adams would have had a good time at this session.

Had a young dispatcher (a little rusty since his last time, a half-year ago). That meant that I, generally gifted dispatcher and royal pain-in-the-butt, got to run trains. Had all sorts of other ideas in mind but got stuck in the mine (the ore mine). Ended up running ore out of Cincinnati over to Calypso Yard and run back the empties. Those two cross-division runs took all night, or roughly twelve scale hours each (I’ve seen some freights do their run (with switching) in just over six hours).

Granted, there were a lot of extras out there. This time, the congestion wasn’t up at Harris Glen (our summit) but oddly down in the yard. I don’t know what was going on down there. Trains came into yard leads and found other trains leaving. Trains held out on the main. And the yardmaster (Steve, I otherwise bow to your skills) for some reason left twenty Calypso exchange cars on the wrong track. Was it just ‘not their time’ or something? Just have the road units push fully down track four, which leaves you to unimpeded switching. And that’s coming from me, a guy who never runs the yard and actually always runs things that avoid it.

The yard is a busy place. Fortunately it has a scrap yard just outside the limits, where smashed units can be towed to recoup operating expenses. In the background, Bob (in red) waits for an ore train that might never come. (Photo: John DV)

My favorite moment was when I was sitting in Harris, waiting for 244. ZZ Top came up and asked WTF I was waiting for. I told him – 244. He said he was 244 in Red Rock. So? So, he explained, he had a checkbox eight, waiting for me in Red Rock. We were like romantic lovers in some Gothic romance, separated and unlikely to every meet, waiting on the other’s arrival. In the end, we advised the dispatcher that I’d run down without papers (a sin) and do the meet in Red Rock. And for any of this blog’s readers who happen to work  for the NTSB, this is just fictional hypothetical fan service stuff, not an actual railroad action report.

But overall it was a very successful session (all the survivors agree to that). The point is, the LM&O is starting to gear up to Calypso operations. We moved four trains of resources into and out of the steel mill area, and are getting our interchange with the railroad as a whole worked out.

One problem – we are still dropping wheels all over the place. I think I’m going to establish and in-session bad order box so the cars that are very problematic can be removed (either for service or truck-replacement). And we will probably hold an open discussion on additions to ops (Where will our ore come from? How will steel mill and Nazareth cars be spotted?) after the next business meeting.

Anyway, thanks to the cub dispatcher for getting non-wrecked trains over the line. Maybe you’ll want to try again (so I can run again, in ulterior-motive fashion). And thanks for everyone who came out and shined (well, shined headlights into each other’s eyes). 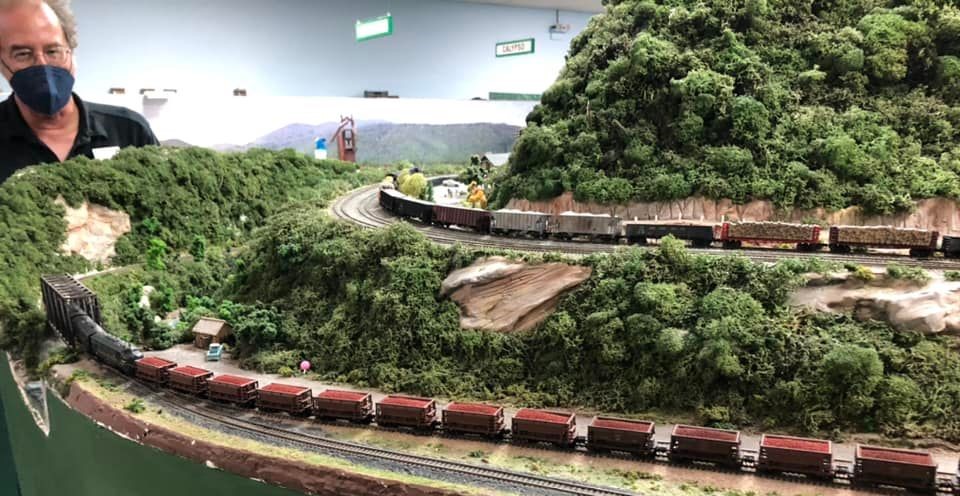 The masked engineer (and blogger) gets to run ore out of Cincy while the Harris Glen Turn works the high line. We’re five hours into the session and I’ve only made Carbon Hill. This is going to take all night! (Photo: John DV)