here are those days where ops doesn’t seem worth it.

I knew there was going to be problems when most of the club officers didn’t show up. That means I’m the sole host. I had to get everything ready and was pretty busy, setting up the computer and getting the clocks running (and bringing the phones back online, since we are evidently a club that laughs at death). Since most of the trains were signed up for, I grabbed helpers out of Calypso. Got Dusty Klauck on the front end of 223 and up the hill we went. While Bob gave me good instructions and had a steady throttle hand, we had a number of car issues (I hate that Milwaukee Road covered hopper – if I so much as breathed, that light-weight cobble-wobbler would jump the tracks). But Dusty was cool with it and we got over Harris, coasting down all the way to Martin.

And that was cheap. Mr. Lazybones Dispatcher wasn’t cutting off crews at Harris but running them alllll the way down to their opposing yards. Da Fug? But he assured me that he’d put us on trains running homeward. Nobody would have to stay in a hotel. He said. 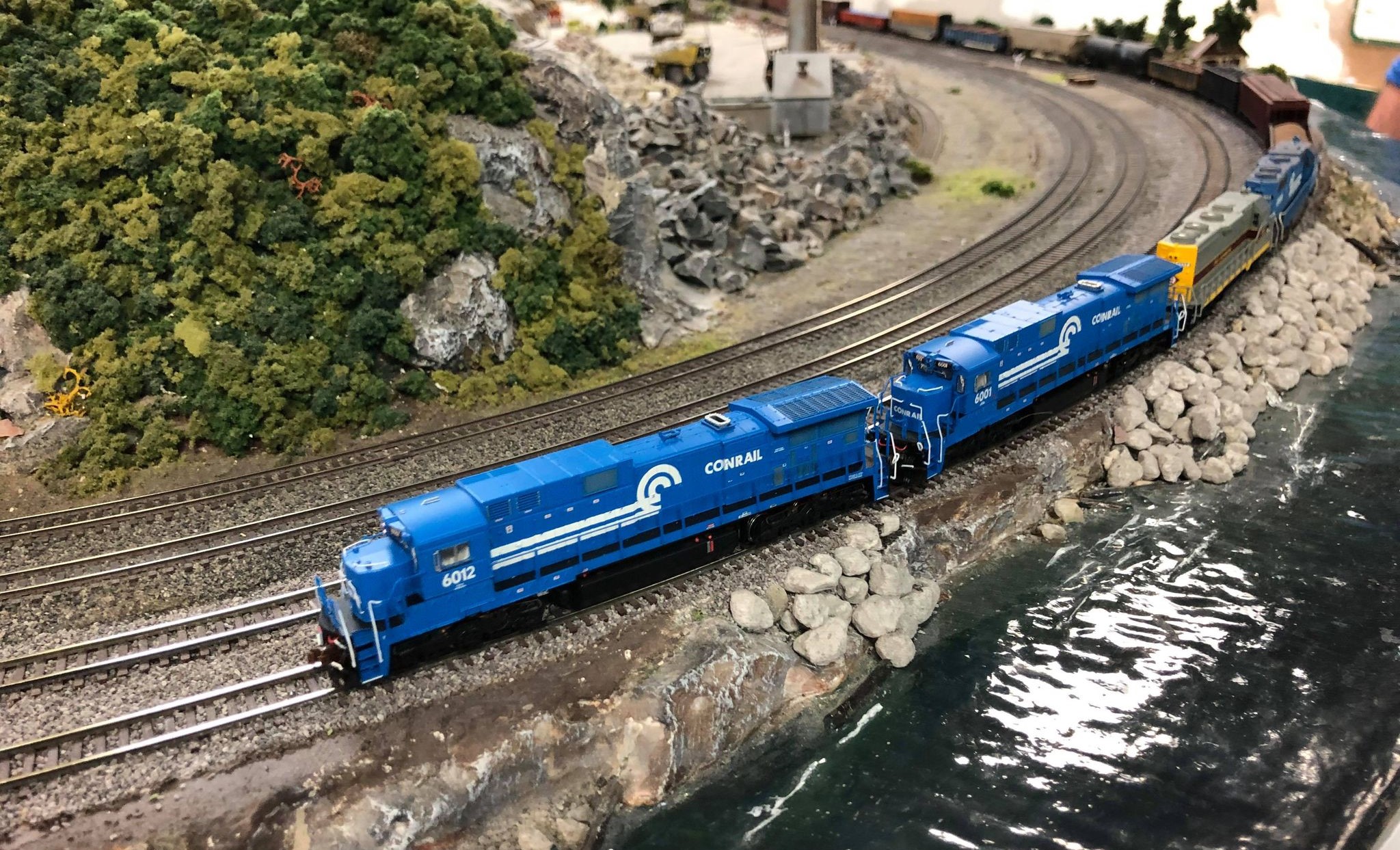 Shannon brings 244 into Martin for light switching – I cut in midtrain to shove him up the hill (Photo: John DeVasto)

Anyway, with relief I rolled into Martin and picked up 244 (just made it too – there is a reason we cut off at Harris and hustle on home). Shannon was on the Conrail head end and this time I picked out a nice heavy boxcar to push on. We didn’t have as many problems going over the hill (but we did have some – and I was watching the slack like a hawk). The trick of the thing became apparent when we got to Harris and that heavy box car went off the rails for the fourth time in the ascent. I looked closely – it was missing an axle!

With that boxcar tipped into the weeds and forever abandoned, we made good time down the slope, through Lehigh and into Calypso. And yes, here was the payoff. The Martin helpers had not picked up another freight and the crew had simply walked away from their engines, still idling on the eastbound arrival track (and I’m not naming names, AJ). But he was gone by then so the dispatcher’s master plan didn’t work. I had to run a LEM across 2/3rds of the division. Of course, by then, the dispatcher decided there was better things to watch on TV and had gone home.

What did we learn today, kids? We learned that we don’t run engines miles beyond their terminus points simply to avoid writing a warrant or two.

By the time I got the engines back to Martin, people were slipping out the door like a baby’s poo out of a leaky diaper. But nobody had run Shelfton Turn. Kyle, a new member, agreed to run the hop with me so after firing up those fitful LM&O Dash-9s, we ran across the seemingly abandoned mainline and down to Shelfton.

And I’ll give Kyle this – he’s a good local operator. We worked out some of the tight puzzles down there and managed to get everything put away (though getting into Gallard was a spectacular pain in the ass, what with all the covered hoppers that were blocking our moves). Anyway, Kyle stuck it out with me – we climbed back out of the hole and ran on our own recognizance to Martin where we put everything away, the last two men standing.

So yes, a long night, what with light cars, those lousy drum motors, the missing axles, the heckling, the light attendance and the superintendent duties.

We ran everything but 271, so that wasn’t bad. Had some new people learn the line, always good. Otherwise, I’m tired and, as you can see, cranky, but a look on Facebook showed that everyone seemed to have fun. So I guess that’s what counts.