Some sessions are great sessions that put a smile on your face for the drive home, and have you flipping through your railroad books long into the night.

And then there was last night.

We were packed, always good, lots of guests, but then again it makes running a bit tricky and our mistakes all the more embarrassing. And then everyone seemed a bit “off” (more on this in a bit). A couple of crews left turnouts open on the main. A couple of crews drove into those spurs with mainline trains, forcing sheepish backing moves. And a couple of crews complained about turnouts that threw every car on the ground (and which were set against them). So most of my effort was spent getting the clocks working, getting equipment on the rails, getting dodgy turnouts to throw, answering questions. I did get to run the Harris Glen turn up the hill, a fun job married by one of my locos blowing a chip (meaning I ran it with a single four-axle). Got everything put away and made it back to Calypso – fun run.

I was going to run 271 after this but someone called for helpers and the usual crew was out on the road. So I dialed up and lugged a freight over the hill. Was going to cut off at the summit and slip into the pocket but an eastbound coal drag called for help in Pittsburgh, so I rolled on point down the Red Rock and dropped off. Eventually they showed up (and good thing I was there – I had to drag them fully into the siding). We got over the hill fine, and yet another call, this time at Hellertown from a crew on a potentially-stalled freight that would need a boost. So over I went to them. Coupled up and sat for a bit (as usual on busy nights, the DS was new and starting to slip backwards into time – bad sign to see every callbox in use). I was enjoying the irony of the fact that the crew I was helping was the usual helper crew. I was in the midst of coming up with a sharp crack – “So, the shoe is on the other foot, eh? The helper becomes… the helped” when the guy one-upped me by suffering a medical emergency. He had to go sit down and sip water, but he looked bad. I asked if we needed an ambulance but he said no (frankly pal, you looked like death microwaved for 10 seconds). With him weakly waving me back to the cab, I left him to die in that metaphorical ditch and, with a throttle in each hand, coaxed the drag freight up and over the summit. Rode out my warrant to Red Rock and had just gotten into a siding and snagged another just-off-the-footplate crew to run the freight in to Cincinnati when our fallen member decided to even look worse (and I haven’t finished getting that dead-guys plaque fixed up yet). He needed to take his engines and get home, and he really couldn’t drive like that. So I’m standing there like Han Solo in the snows of Hoth when the TaunTaun dies, looking around, trying to figure what to do.

Good John, my relief crew, said, “I’ll run it in.” “But he’s taking his engines. And what about the helpers? Who will get them back to the Glen?” Jonathan considered it. “Pull the engines off. I’ll run it to Cincy on the helpers.”

That was such an unconventional, outrageous plan that we went with it. While Frank (ever as friendly and smiling as the Red Jack) gathered our member’s things, I found Bob the Veep in the back, looking over my Harris Dead engine. “Chips fried,” he told me.

“Not as fried as that guy out there. I gotta drive him him. And you gotta drive me back.” Thankfully, for all his political faults, Bob agreed without a moment’s doubt (the gun pointed at his head might have helped). So off we went into the night, carrying our critically injured member home, who, in the spirit of Monty Python, “got better” as the miles rolled by.

Got back to the club at 11pm and saw one car. Came in and found Bad Jonathan sticking around for my return, running the final freight (my freight) in. This will make out automated freight forwarding for next month a lot easier, so maybe he’s Not So Bad Jonathan now. While he ran off its final miles, I looked over the ladings for Martin Yard and wondered if the yardmaster had actually followed his sheets or had another system in mind (numerical sorting perhaps). That’s going to be a cleanup job for myself and Bruce to tackle next week.

But, yeah, we shut things down at half-past 11pm (7am on the clock) and locked the place up.

But no matter how bad the session was, it was still good. I don’t know how many trains we ran (when you aren’t the DS, you can’t see the big picture). But it was fun.

And we’ll try to make the next one even “funner”. 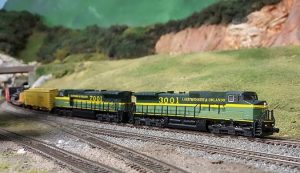